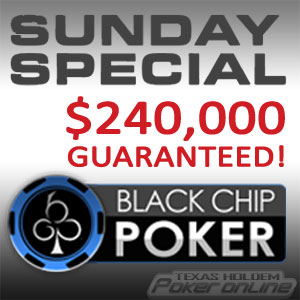 Black Chip Poker is celebrating the 4th July a day early this year with a $240,000 guaranteed “Independence Day” event on Sunday 3rd July.

The “Independence Day” event is scheduled to replace the site´s regular “Sunday Special” tournament at 3:00pm (ET). However, despite the prize pool increasing from $115,000 to $240,000, the buy-in will remain at $215.00 and the tournament will have the same structure as usual except for an extended late registration period.

If you are a regular player at Black Chip Poker, you will familiar with Freebuy tournaments. If not, here is a brief explanation:

Throughout this week at 2:00am and 9:00am, Black Chip Poker will be hosting special “Independence Day” Freebuy sub-satellites. Each guarantees a minimum of one seat in the fifty seat guaranteed mega-satellite, plus additional cash or extra seats if the money raised through re-buys and add-ons exceeds $27.50 (the buy-in for the fifty seat guaranteed mega-satellite). Re-buys and add-ons in each of these tournaments cost just $0.25.

If the times are inconvenient for you, the site is also hosting sub-satellites to the fifty-seat guaranteed mega-satellite at 5:00pm (buy-in $3.30) and at 10:30pm (buy-in $1.65). Although these events might not be free to enter, the smaller fields may make it more likely that you qualify for the mega-satellite. You can also pick from a range of other satellites that offer seats directly into Sunday´s “Independence Day” event.

Another event with a “240” theme is Black Chip Poker´s 4th July reload bonus. From Friday 1st July until Monday 4th July, every player making a deposit into their account with the Black Chip Poker bonus code “JULY4” will automatically receive a 100% match bonus on their deposit up to $240 (minimum qualifying deposit for the bonus is $10.00, but watch out – some deposit methods at Black Chip Poker have a $50.00 minimum).

The bonus is released in $5.00 units every time players pick up 120 Award Points for contributing to the rake in ring games or for paying a fee to enter one of the site´s Sit & Go games or poker tournaments (there are no fees for playing in Freebuy tournaments). Award Points are distributed at the rate of 5.5 points per dollar raked/paid in fees, and there is a time limit of thirty days from the date of the deposit in which to clear the reload bonus.

Another Million Dollar Sunday on the Way?

It may not be happening this weekend, but TexasHolderPokerOnline.com has learned that Black Chip Poker plans to host another of its million dollar guaranteed events in August. The rumors are that the next Million Dollar Sunday will be the highlight of a yet-to-be-announced “Bigger Online Super Series” (BOSS) – a tournament series specifically aimed at high rollers with plenty of low buy-in satellites for those with more modest bankrolls.