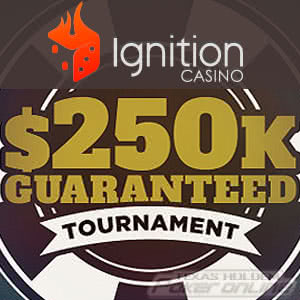 It’s Super Bowl time again and Ignition Poker is getting into the game by hosting a massive $250K guaranteed tournament on the day before Super Bowl Sunday.

That’s Saturday, February 2 at 17:53 ET for what’s being billed as the Main Event of Super Bowl weekend. The $300 + $25 buy-in gets you a direct seat to the action and a chance for a huge payday.

Of course, the organizers at Ignition Poker are well aware that lower stakes players would like a seat at the table too. Therefore, a bunch of satellites at a wide range of buy-ins are running right now.

The lowest satellite buy-in is the $7 Cheap Seats that will propel winners into a $44 satellite. Another successful showing in that event puts top finishers into the $250K GTD – the tournament that’s looking like the place to be on Groundhog Day, Feb. 2.

In addition to the $44 satellite, players have lots of other satellite options at the following buy-ins: $11, $16.50, $22, and $27.50. Those satellite events are running every day right up to the day of the tournament, with a varied number of guaranteed seats available for the $250K GTD Main Event.

There is yet another option available toward securing a seat that will appeal to Sit & Go players. A 6-max Sit & Go at a $55 buy-in will send the winner to the big show on the second of February 2019.

If $55 is perhaps too much to spend, players can make a go of it by first winning an $11 Sit & Go that feeds into the $55 Sit & Go. It’s a two-step process for players taking the $11 route, but one that can ultimately be quite lucrative if you play your cards right.

While a $250,000 GTD tends to grab most of the headlines, that’s not the only special tournament on the schedule for Super Bowl weekend. On the same day of the Main Event – Saturday February 2 – Ignition Poker is also hosting a Mini Main Event.

The Mini Main Event features a $25,000 guarantee and has a starting time designed for early birds at 7:53 ET. While most typically like to sleep in on Saturdays, that’s not necessarily a problem considering the late registration period that extends beyond three hours.

Both the Mini and the Main Event are using the same format and structure, as well as the same satellite schedule and buy-in. A $300 + $25 buy-in for both events is a boon to players who excel at winning seats via satellites, as the choice is yours as to which event – Mini or Main – is a better fit for your schedule and/or style.

The $25K GTD will likely have a considerably smaller field of players to wade through on the way to making the final table. The $250K GTD, while more lucrative to be sure, will prove to be a steeper climb with many more opponents.

Of course, there’s always the option to enter or win a satellite to both! That will certainly solve the dilemma of which event to play.

This year’s Super Bowl in Atlanta featuring the Los Angeles Rams and the New England Patriots promises to be one for the ages with the Pats slightly favored. However, the real action may occur the day before at Ignition Poker where the $25,000 GTD Mini Main Event and $250,000 GTD Main Event will produce some big winners among the site’s loyal players – and perhaps a newcomer or two.

If you’ve yet to play at Ignition Poker, a 100% up to $1,000 Welcome Bonus awaits. As do two exciting poker tournaments on the day prior to Super Bowl Sunday.