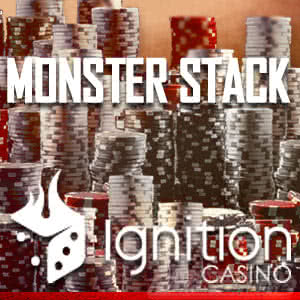 Online poker players who enjoy multi-table tournaments with huge starting stacks may want to head over to the poker room at Ignition Casino where the MTT schedule now includes two monster stack events every night at both large and small buy-ins designed to appeal to all bankroll sizes.

The starting stacks are a massive 15,000 in chips for both nightly tournaments, giving players a lot of action for their money. The tourneys feature buy-ins of $27.50 and $215, respectively, and the starting times every night are at 7:00 and 7:25 p.m. EST.

The duo of nightly Monster Stack tournaments has been running since April 2 and will continue through mid-summer until July 14. That’s more than three months of Monster Stack action that has already become quite popular among Ignition players, with good turnouts for both events every night.

Those two events were six-handed Monster Stack tournaments. It’s important to note that the game types as well as the amount of the guarantees for both events will be different every night. Remaining the same, of course, will be the 15,000 in starting chips.

Typically, the 7:00 p.m. event that costs $27.50 to enter will feature a guaranteed prize pool anywhere from $10K to $15K. The 7:25 p.m. nightly Monster Stack prize pool will range from $25K to $50K – guaranteed. Naturally, the bigger the buy-in, the greater the reward for winning players.

If the buy-ins of the Monster Stack events don’t align with the size of your budget, especially the $215 tournament, Ignition Poker has just what you need in the form of qualifiers where you can win a seat to the huge chip stack tourneys for as low as $3.85. In fact, Ignition has worked out a tournament path for both events via qualifiers and direct satellites at various buy-ins that can put you in the game for Monster Stack action.

There are a number of satellites running daily. To find them, simply log in to the poker client and click on “Scheduled Tournaments.” From there you can click on “Tournament Type” and filter out all the other events by selecting only “Satellites” and “Monster Stack.”

Keep in mind that the play and strategy in a Monster Stack event is a bit different than a tournament where your starting chips are only 1,500 or so. You have a lot more freedom and maneuverability, with the opportunity to take a few more chances at scooping some big pots due to the larger amount of chips in front of you.

Of course, if playing it safe and nursing the chips at your disposal is more your style, then follow that game plan if you must. In any event, your time at the table will likely be much longer with such a gigantic starting stack. Remember, the goal is to spend a real long time playing and make it to the final table – and maybe even win!