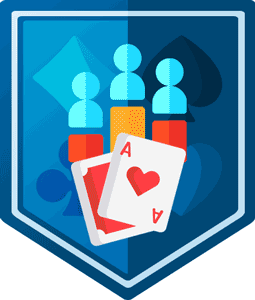 When we play poker, the general goal is to win the money in the pot by getting our opponents to fold or by having the best hand. If you play low stakes poker, you will often need to have the best hand to win since players don’t like to fold very often.

It’s crucial that you understand what beats what so that you can understand who wins at the end. It’s also important to know what hands beat what since many times you will have e a draw to a hand that could win. If you don’t know what this hand rank is or what it beats, you will never make any money playing poker.

Most forms of poker you play, these hand rankings will apply. There are a few exceptions to this rule though. Games such as Razz, Hi-Lo or unique games like Badugi will not apply. But, all the common games like HoldEm and Stud will use this hand ranking rule.

Without further ado, here are the hand rankings in order from worse to best.

High Card – A High Card is when you have nothing at all and can only use the highest ranking card in your hand. If you have an Ace, this would be the highest card and what you would use to determine if you win or lose the hand.
high card

Pair – A pair, or one pair, is two matching cards. If you have 2 Aces or 2 Kings, this would be a pair.
pair

Two Pair – Two pair is when you have 2 matching cards of 2 different kind. If you have 2 Aces and 2 Queens, you would have 2 pair.
2 pair

Straight – A straight is when you 5 cards in order. 5-6-7-8-9 would be a straight. The suit does not matter, as long as they are in order and have 5 cards, it qualifies as a straight.
straight

Flush – A flush is when you have 5 cards of the same suit. If you had 5 cards that were all hearts, this would be a flush.
flush

Full House – When you have 3 of one card and 2 of another is a full house. 3 Aces and 2 Tens would make a full house.
full house

In games like Omaha where you are dealt 4 cards, you must use 2 of the 4 cards and 3 on the board.

That’s all the hand rankings in order form worse to first. The lower the hand rank, the easier it is to get statically speaking. It’s very common to win with 1 or 2 pair in HoldEm games.