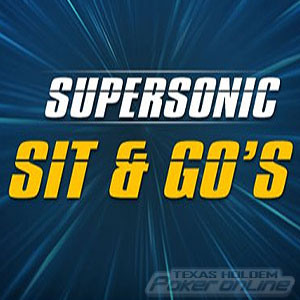 Players logging into their Carbon Poker accounts over the weekend will have found an intriguing addition to the “regular” list of software updates – SuperSonic Sit n Go games. These new super-fast games are an addition to Carbon Poker´s extensive options for players, and compliment their existing 6- Max Hyper Turbo and Heads-Up Sit n Gos with an even faster game.

The new SuperSonic games are available in two formats – 4-Max and Heads-Up – both being winner-takes-all and both charging slightly less rake than the Hyper-Turbo games to make them more beatable. What recreational players will like best about the new formats is that there are no time banks to slow the action down and fast-paced action is ensured throughout each game.

There are several key differences between Carbon Poker´s existing Hyper Turbo Sit n Go games and the new SuperSonic games and these are most noticeable in the 4-Max version of the format. In the 4-Max “winner-takes-all” version (rather than the 65/35 division of prize money in the Hyper Turbos), levels are two minutes in length (rather than the three minutes of the Hyper Turbo games), with an additional 10/20 level inserted at the beginning of the game and a new 50/100 level 7.

There are rake “discounts” on all SuperSonic buy-ins – so, for example, players entering an $11.00 buy-in 4-Max SuperSonic game would be contributing $10.55 to the prize money ($0.45 rake) instead of $10.48 ($0.52 rake ) in the Hyper-Turbo games, meaning that the prize money for the winner is $42.20 rather than $41.92. Players still get a 300 chip starting stack to begin with, but because of the different blind structure, this is equivalent to 15 Big Blinds, rather than the 10 Big Blinds at the start of Hyper Turbo games.

Similar differences appear in the Heads-Up SuperSonic Sit n Go games – levels being one minute in length instead of two minutes, new 15/30 and 20/40 levels being inserted at the beginning of the game and a discount being offered on the rake charged on the buy-in – although the discount is much smaller for most heads-up Supersonic Sit n Go games and, at an $11.00 buy-in, is the equivalent of 1 cent.

To find the SuperSonic Sit n Go games, simply open up the Carbon Poker lobby and select “Sit & Go”. In the second column players have the option of “All”, “Regular”, “Turbo”, “Hyper” or “SuperSonic”. Click on “SuperSonic”, and all the available games will be displayed – 4-Max games at the top of the list and Head-Up games beneath them.

The SuperSonic Sit n Go games are an exciting addition to Carbon Poker´s existing portfolio of games (which you can read about in our Carbon Poker Review), and coincide with the August reload bonus offer. Carbon Poker is offering existing players the opportunity to claim a 100% bonus on reload deposits of up to $500.00 when they use the bonus code “AUGPK” while making a deposit before August 31st (minimum $35.00).

The new format of Sit n Go games is also likely to attract many more new players to the site and, if you are not already a Carbon Poker player, don´t miss out on the fantastic 200% bonus of up to $5,000 when using bonus code “CARBONPK”. More information about the first deposit bonus at Carbon Poker and the other benefits that new players receive can be found here.