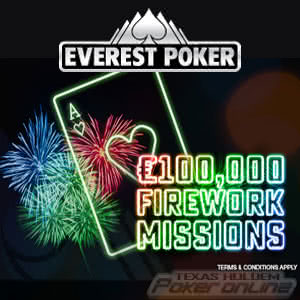 Throughout November, players at Everest Poker are being invited to complete special Firework Missions for the chance to win their cut of €100,000.

“Remember, remember the fifth of November” is a nineteenth century English folk verse commemorating the day on which a group of Papist terrorists attempted to blow up the British Houses of Parliament. These days, the event is more commonly commemorated with fireworks displays and the burning of an effigy representing one of the Papist terrorists – Guy Fawkes.

Usually the displays only last a day; but Everest Poker has chosen to commemorate the event throughout the whole of November. During the month, the site is inviting players to light up the sky by completing special Firework Missions in order to win seats in playable and flip freerolls. Players can also complete month-long missions in order to win a seat in the €25,000 Fireworks Finale on 3rd December.

Each day until 3rd December, players will be given a choice of which Firework Missions they want to tackle from cash game missions and Twister missions. The daily missions vary depending on what day it is, so – for example – the choice on a Wednesday will be either to see the flop twenty times at the cash tables or play ten games of Twister with a minimum buy-in of €1.00.

The Weekly and Monthly Firework Missions

In addition to the daily freeroll tournaments, players can qualify for weekly freeroll tournaments by completing a weekly Firework Mission. For cash games players, the weekly mission is to be dealt a pair of Queens as their hole cards ten times; and, for Twister players, the goal is to win fifteen Twister games throughout the week with a minimum buy-in of €2.00 each. Players who complete the weekly Firework Mission again have the choice of either entering a playable freeroll tournament or a flip tournament. Both events take place on Sundays until 26th November, and both have €5,000 in cash prizes.

On Sunday 3rd December, Everest Poker will hold the Fireworks Finale tournament. This event has a cash prize pool of €25,000 and, in order to qualify for the event, players have to complete ten missions throughout the period of the promotion and enter ten daily freeroll tournaments. There is no flip tournament alternative, so mark the date and start time (8:00pm) to make sure you don´t miss out on a potentially lucrative event. Also remember although entry tickets for the weekly and monthly freeroll tournaments are awarded automatically, manual registration for the target events is still required.

Will You Light Up the Sky this Month at Everest Poker?

Although the Firework Missions promotion is typical of the mission-based promotions Everest Poker has hosted this year, there are a couple of improvements made on previous promotions. Players now have the choice of playing in “playable” freerolls or leaving their profitability to chance in “flip” freerolls – which is a suitable option for players who will be unable to log into their accounts and play in the playable freerolls at the time.

The choice of two daily and weekly freeroll tournaments to play also means that more players will share in cash prizes available in the promotion. Furthermore, the promotion has been extended to five weeks, rather than the usual four weeks – giving players with limited opportunities to play online poker during the week a better chance to qualify for the Firework Finale. So, will you light up the sky this month? Only if you are playing at Everest Poker (review).