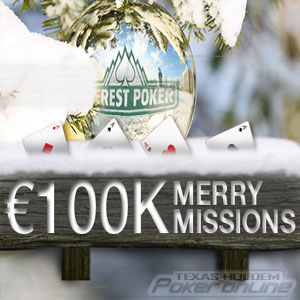 The Merry Missions promotion at Everest Poker offers players the chance to win a share of €100,000 by completing daily and weekly merry missions.

The concept is pretty much as before. Players have a series of missions to complete each day and each week. Those who complete the daily missions are rewarded with seats in a €500.00 “All-in Shootout” in which every player is all-in every hand until a winner is determined.

The weekly missions are a bit more convoluted and involve players completing a harder challenge and making a deposit into their Everest Poker accounts. Those who fulfil the weekly mission criteria are rewarded with seats in a Merry Missions weekly freeroll with a €10,000 prize pool.

Each day, players are being asked to complete up to three missions. The missions vary in difficulty and can be as simple as winning a Twister game or the pot in a cash game with pocket Aces, or as difficult as winning thirty hands at the same table (heads-up tables do not count) or losing a hand of Texas Hold´em Poker with a full house or better.

As an example of what a player might have to achieve in order to win a seat in a €500 “All-in Shootout”, this is the choice of today´s daily Merry Missions:

Each week, Everest Poker has set a different weekly Merry Mission. Players that complete their missions receive a seat in a €10,000 freeroll tournament that is played on Sunday evenings at 6:30pm. If the players complete their missions twice, they will receive two entries into the freeroll. These are the weekly missions for the five weeks of the promotion.

Everest Poker brands its VIP Rewards program as the best in Europe. To be fair it is probably one of the best in Europe, as it offers the lowest Rewards Points cashouts (starting at just €1.00) and the site adds €30,000 in freeroll tournaments to the program each month.

Players who compete in Everest Poker´s Merry Missions will be earning Summit Points (which get converted into Reward Points) all the time they are attempting to complete their challenges. This adds extra value to the Merry Missions promotion and is well worth considering if you are torn between participating in this promotion, or a Christmas promotion being offered by another site.

For further information about the Merry Missions promotion – or to find out how much added value you could get from the site´s VIP Rewards program – visit Everest Poker.