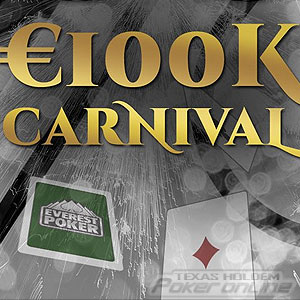 Everest Poker is hosting a special Carnival Mission Month throughout February, during which time players have the opportunity to win their share of €100,000.

Since the middle of last year, Everest Poker has been offering players a little extra each month in the way of “mission-style” promotions – promotions in which players have to achieve specific milestones in order to be awarded seats in valuable freeroll tournaments. Such has been the success of the mission promotions, that Everest Poker is hosting a special Carnival Mission Month throughout February.

The concept of the promotion is similar to before. Players have the opportunity to complete daily and weekly missions with seats in “All-In Shootout” and Freezeout freeroll tournaments up for grabs. The missions are easy to achieve – making the promotion available to players with little time on their hands or to players with a limited bankroll – but offer substantial prizes.

How the Carnival Mission Month Works

The daily and weekly missions for February are:

What Else is Going On at Everest Poker?

February looks like being a good month at Everest Poker. The site is guaranteeing its monthly tournament schedule for €7 million and continuing with its Shasta Sit & Go promotion that gives players the opportunity to build their bankrolls from freeroll level. There is also a big Steps Challenge that allows players to win bigger amounts in cash prizes, and the Twister Poker games – in which players can win up to 1,000 times their buy-in – are running around the clock.

New players will benefit from Everest Poker´s generous welcome offer of a 200% bonus on first deposits up to €750.00, plus €10.00 of free tournaments tokens and a head start in Everest Poker´s rewards program. Further information about the bonus – and details of how it is cleared in weighted stages – can be found in our Everest Poker review.