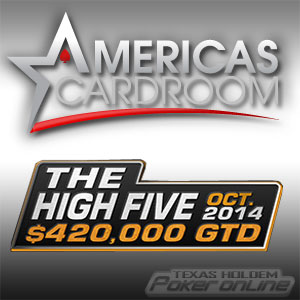 ACR has announced the dates for the third of its popular High Five Series and revealed that the tournaments will have combined guarantees totaling $420,000.

The next edition of Americas Cardroom´s High Five Series is scheduled to take place from Wednesday 29th October to Sunday 2nd November and will feature twenty-five tournaments (five each day) with combined guaranteed prize money of $420,000 up for grabs.

This will be the third time that Americas Cardroom (ACR) has hosted the High Five Series and Michael Harris – spokesperson for the site – said in the announcement of the dates Third time’s a charm is an old expression, but it fits perfectly for this latest installment of the High Five tournament series.

The tournament schedule has been purposefully designed to account for all levels of buy-ins, and a comprehensive satellite schedule will enable players with limited bankrolls to qualify for the more valuable events. ACR is also repeating its “Passport” promotion, in which players can win packages of seats to the series´ feature events.

In a refreshing change to the norm, the highlights of the High Five Series are not cramped together during the final weekend of the series, but distributed evenly throughout the schedule. A $40,000 guaranteed NL Hold´em tournament is schedule for the first day of action, along with a 6-Max event and a PL Omaha Turbo Event.

Satellites Include a Freeroll Path to the Main Event

ACR is providing players with a limited bankroll the opportunity to qualify for the more valuable events in the High Five series with a comprehensive satellite schedule that includes a two-stage “steps” program in which players can qualify for the $150,000 guaranteed High Five Main Event for free.

Ten more satellites are scheduled on each weekday to other High Five tournaments – with buy-ins starting from $0.55 – while on Saturdays and Sundays a host of qualifiers are scheduled with up to four seats guaranteed in the feature events of ACR´s High Five Series. You can see the full tournament and satellites schedules in ACR’s poker client.

ACR is also giving players the opportunity to win seats into six of the feature events in a special passport tournament that takes place on Sunday 26th October at 6:00pm. The tournament has a direct buy-in of $55.00, or players can qualify through daily satellites running at 1:00pm (buy-in $5.50).

If you are not yet playing on ACR, there has never been a better time to get involved. Pop over to our Americas Cardroom review to read about the other benefits of playing on the site and how to qualify for a first deposit bonus of up to $1,000.