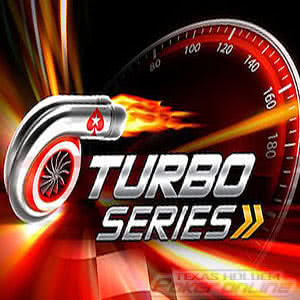 The Turbo Series – PokerStars´ rebranded Turbo Championship of Online Poker – gets underway on Sunday February 18th, and the site is supporting its tournament series will several potentially lucrative promotions – including a chance to win a Platinum Pass to PokerStars´ Players Championship.

The Turbo Series is a fantastic tournament series for players who have to get out of bed and go to work each morning. Due to the shorter length of each level, the excitement of playing in valuable tournament is compacted into a shorter space of time. But this does not mean there are fewer opportunities to win a life-changing amount.

Indeed, between February 18th and March 4th, there are seventy-four Turbo Series tournaments scheduled at PokerStars, with more than $15 million to play for. AND any player who competes in a Turbo Series event has a chance to win a $30,000 Platinum Pass to play in PokerStars´ Players Championship (PSPC) next January.

PokerStars has timed the Turbo Series to be user-friendly for players in Europe and the Western hemisphere. With the exception of the opening day, tournaments start at two-hour intervals from 3:00pm to 11:00pm (all times GMT), and each event is supported by an excellent satellite schedule that will suit all levels of bankroll.

Practically every event has a valuable guaranteed prize pool, but the two that every player will be aiming to get a share of are the Twin Turbo Main Events that will take place on Sunday March 4th at 7:00pm. Respectively these are guaranteed for $1 million (buy-in $55) and $2.5 million (buy-in $1,050) and both will award a PSPC Platinum Pass to the winner.

A third PSPC Platinum Pass is up for grabs in a special All-In Shootout scheduled for 8:00pm on Monday March 5th. Every player who has played in a Turbo Series event will automatically be entered into the All-In Shootout whether they have cashed or not. Although it is not necessary to be physically present when the game is played, there will be thousands of players logged in for this one!

While the Turbo Series is running, the site will be continuing with its regular range of promotions for non-tournament players. These vary according to location, but include the Card Match promotion and Suit Race promotion for cash game players, and the Collectibles promotions for Spin & Go players. Plus, of course, there is the deposit bonus for first time players.

To further support the Turbo Series, PokerStars is hosting a series of promotions in which players can win tickets to the feature events. These include:

All of these promotions start next week with the exception of the “Second Chance” freeroll tournaments that start on Monday February18th. What is so great about these promotions is that if you win more than one $1,050 tournament ticket, you will be able to convert your extra tickets into tournament dollars and any unused tickets of a lower value can be used to play in regular PokerStars tournaments.