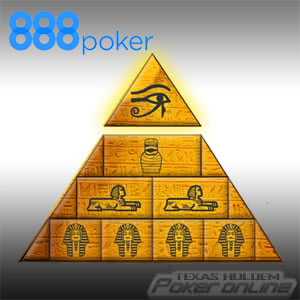 888Poker has launched a new promotion for the summer in which players are being challenged to climb a Golden Pyramid in pursuit of a share of $1 million.

888Poker´s new summer promotion is an exciting variation of the “Jackpotland” promotion the site hosted earlier this year. This time based around Egyptian mythology, the Golden Pyramid promotion has many familiar features, but also some new angles that will appeal to both new and experienced players.

Similar to before, the Golden Pyramid promotion is comprised of a series of NL Hold´em tournaments players can qualify for by completing missions. There is also a “Spin and Win” feature giving away tournament entries among other prizes. However, the option to complete harder missions to play in higher value tournaments and the distribution of 600,000 Gold Tokens throughout the promotion are new features not been seen before.

As the promotion runs until Sunday 30th July, the three free tickets you receive are not going to be sufficient to help you maximize the potential of the Golden Pyramid promotion. Therefore 888Poker is giving players the opportunity to earn four tournament tickets every day by completing challenges. The challenges progress in difficulty as the value of the target tournament increases.

In order to earn an extra tournament ticket for a $500 Pharaoh Tournament, you can choose to either win a game of BLAST Poker with buy-in of $1.00 or more, win ten hands of NL Hold´em at the cash tables (min. blinds $0.02/$0.05, heads-up excluded), place five bets of $1.00 or more at the casino (certain games excluded) or have a Live Sports bet with a minimum stake of $5.00.

The Wheel of Ra and Gold Token Giveaway

In addition to the Daily Challenges, players can also win seats in the daily Golden Pyramid tournaments by spinning the “Wheel of Ra”. This option will appear the first time you log into your account each day, with a second opportunity to “Spin and Win” if you log into your account via the 888Poker mobile app after 5:00pm. If you fail to win a tournament entry ticket, you will instead be awarded a free sports bet or casino freeplay.

The Gold Tokens will be given away during randomly selected daily Golden Pyramid tournaments. Players will not know they are in a “Cleopatra Tournament” (which could be any of a Pharaoh, Sphinx or Tutankhamun Tournament) until after the event has started. Thereafter the top one hundred players in each Cleopatra Tournament will be given a special prize of 2,000 Gold Tokens each in addition to any cash prizes they win and their seat in the next step up the pyramid.

The Gold Tokens can be redeemed for cash, general tournament entry tickets or a host of themed goodies in the 888Poker Club. We looked it up, and 2,000 Gold Tokens have a cash exchange value of $20.00 – so not a negligible prize at all. However, Gold Tokens won in the Cleopatra Tournaments expire after sixty days, so it is best to redeem them sooner rather than save them up for a more valuable exchange, or else you might lose them.

If you do not already have an account with 888Poker and would like to take part in the Golden Pyramid promotion, downloading the free software is easy. Simply follow our links to 888Poker and click on the yellow button that reads “Download Now”. Once the download is completed, you will be invited to create a free account. Once you have created your account, 888Poker will send you an email explaining how you can get your hands on a no deposit bonus of up to $88.00 (varies according to your location).

You will also be invited to make a real money deposit into your account. This is necessary if you want to take part in the Golden Pyramid promotion, but also gives you the opportunity to take advantage of a 100% match bonus on your first deposit up to $600.00. Details of how to clear the bonus and the time allowed can be found in our page dedicated to the 888Poker bonus. You might also like to take a look at our 888Poker review to find out more about the no deposit bonus and the sort of experience you can expect when you play at 888Poker.