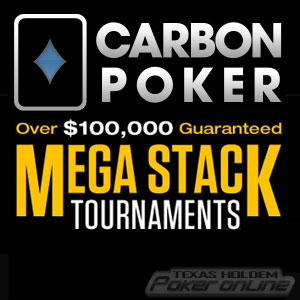 Carbon Poker has announced a series of tournament treats to start 2015 – including a Carbon Online Poker Series with over $2 million in guaranteed prize pools.

Carbon Poker is intending to start the New Year with a bang, and has rolled out a trio of tournament treats for the early months of 2015. First off is a “Mega-Stack Sunday” – in which five mega-stack tournaments will be played simultaneously – and the following week Carbon Poker revives its popular $20,000 “Dollar Frenzy”.

However, the highlight of the tournament treats is the Carbon Online Poker Series which starts on February 8th. Sixty-seven tournaments will be packed into fifteen days of action, with a very special poker bonus for players who buy-in directly into the Main Event. It all adds up to being a very happy New Year at Carbon Poker.

The first of Carbon Poker´s tournament treats takes place on Sunday January 18, when the site will be running five Mega-Stack tournaments simultaneously with a combined guaranteed prize pool of $103,000. All five tournaments kick-off at 16:00pm (ET) with buy-ins starting at $2.20 and rising through stages to $109.00.

The following Sunday (January 25), Carbon Poker will be hosting a “Dollar Frenzy” event. The tournament gets underway at 16:00pm (ET) with the buy-in of just $1.00 and a guaranteed prize pool of $20,000. Despite being one of the most popular events in Carbon Poker´s tournament schedule, there is almost certainly going to be an overlay, so make sure that this is an event you don´t miss!

If you want to freeroll your way into the “Dollar Frenzy” event, Carbon Poker is hosting freeroll tournaments between January 1 and 24 at 20:00pm (ET) each night. The top twenty-five players in each freeroll will win a seat in the Dollar Frenzy tournament, so that´s at least 600 hundred players who will be noting January 25 in their 2015 diaries!

As mentioned above, the Carbon Online Poker Series crams sixty-seven events into fifteen days and had more than $2 million in guaranteed prize pools up for grabs. Among the events is a good range of formats (Mega-Stack, Turbo and KO events) and there is a good selection of Omaha and mixed poker games among the schedule as well.

Highlight of the series is the $215.00 buy-in Main Event (OPS#71) which has a guaranteed prize pool of $250,000. Although there are officially five “Main Events” at various buy-ins, this is the one that everybody will want to play in because of its valuable guaranteed prize money. Satellites for the Main Event are already running in the Carbon Poker client.

To coincide with the Carbon Online Poker Series, the site is also offering a no deposit, free poker bonus to players who buy-in directly to the $215.00 Main Event. The $100 bonus is available to every player who registers using their cash balance prior to midday on the day of the Main Event (February 22nd).

The bonus will be added to players´ accounts within an hour of the tournament starting, who then get thirty days to earn the Player Points to redeem the bonus. If you can afford to buy-in directly to the Main Event, this is an opportunity not to be missed because it represents a 50% discount on the buy-in!

Still the Best Poker Bonus on the Internet

Carbon Poker´s poker bonus is a colossal 200% match on first deposits up to $2,500. This means that if you deposit the maximum amount, you would be eligible for a poker bonus of $5,000. Details of how to clear the bonus – and a list of all Carbon Poker´s current promotions – can be found on our Carbon Poker bonus code page. If you would like to find out more about being depositing onto the site, take a look at our review, for an unbiased opinion of what it is really like to play at Carbon Poker.