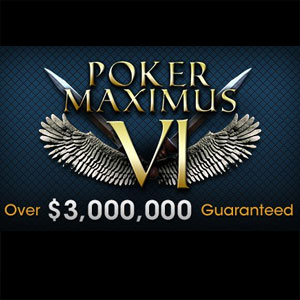 Carbon Poker has announced details of its sixth Poker Maximus series – with more events over more days than ever before, and $3 million guaranteed in prizes.

The summer is over and “online poker series season” is upon us once again; and while the rest of the world looks forward to PokerStars´ World Cup of Online Poker (WCOOP), online poker players in the States will be pleased to know that they have not been forgotten. If you don’t have an account at this poker site yet, now is definitely a good time to check them out by reading our 2022 Carbon Poker review here.

The sixth edition of the Poker Maximus Series will be hosted on Carbon Poker from Sunday 8th September and contains 85 events that will be played at the same time as the WCOOP takes place – although there is a little discrepancy between the $40 million on offer in the WCOOP and the $3 million in guaranteed prizes available during the 15 days of Poker Maximus VI.

Like the five previous Poker Maximus Series, tournament buy-ins start at just $1.10 and rise through the range of values up to the massive $530.00 buy-in High Rollers events. In addition to the multitude of No limit Hold´em events there will also be a good range of Omaha, Stud and HORSE tournaments – each offering their own accolade for the winner and potentially a substantial overlay.

With the Poker Maximus VI series coinciding with the WCOOP, many of the rest-of-the-world players who compete on Carbon Poker may be absent from the series as they aim to win bigger prizes on PokerStars. This may not only affect the value available in the Poker Maximus tournaments, but also in the satellite qualifiers which offer a guaranteed number of seats.

The whole of Sunday 23rd September is “Main Event Day” with eleven events scheduled to take place – the most valuable of all being the $215.00 buy-in Event #75 which has a guaranteed prize pool of $250,000. In total, more than $735,000 will be up for grabs on the final day of the series, but players should not wait until then to get involved.

On Sunday 8th and Sunday 15th, Carbon Poker is increasing the guaranteed prize pool on its Sunday feature tournament to $175,000 and, on the first Friday of the series (Friday the Thirteenth), the most valuable non-NLHE event is scheduled – a $60,000 guaranteed 7 Card Stud Hi Lo tournament (Event #30).

Freeroll Your Way into the Main Event

Carbon Poker is also offering players a dual opportunity to freeroll their way into the $250,000 guaranteed Main Event. Each day, five freeroll qualifier tournaments are being played in which the top twenty-five players qualify for a weekly freeroll final. Each of the players who finish in the top five each week will win seats into the Main Event on Sunday 23rd September.

The second opportunity is the Maximus Freeroll Giveaway on Saturday 31st August in which the top 1,000 players will be rewarded with coupons to enter Poker Maximus events – ranging from $1.10 for players who finish 1,000th to $215.00 for players who finish in the top nine positions. To qualify for the Maximus Freeroll Giveaway, players just have to earn 100 Carbon Poker VIP Player Points before the cards are in the air for the freeroll tournament at 15.00pm Server Time on August 31st.