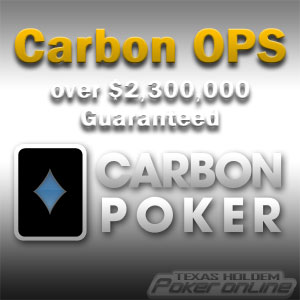 Carbon Poker’s popular Online Poker Series (OPS) is back this month and is better than ever with 76 events scheduled over 15 days.

The OPS is already underway, having begun on May 3. If you missed the first two days of tournaments, don’t worry because there is plenty of exciting poker tournament action remaining. The OPS will run through May 17.

The prize pools for the entire series total a whopping $2,300,000 – guaranteed. That includes five Main Events on the final day of action that guarantee a collective $475,000.

Buy-ins vary considerably throughout the OPS, making sure that players of every budget can take part. In addition, there are satellites running right now that allow players to win their way into top events at a fraction of the entry fee.

Want to take part in the OPS action at Carbon Poker but have never played at the site before? A first-time deposit bonus of 100% up to $1,000 awaits new players.

The bonus is credited to new depositors in increments of $20 upon accumulating the required number of Player Points. Those points are earned simply by playing real-money poker at Carbon, whether it’s at the cash or tournament tables. Sixty days are allowed in which to clear the bonus.

Many online poker rooms have done away with Bad Beat Jackpots. Not so at Carbon Poker, where losing a hand with four eights or better while playing No Limit Hold’em ring games wins the jackpot.

The BBJ is fully funded by Carbon Poker, meaning that no rake is ever taken from pots to build up the jackpot. It’s an added bonus for players to take the sting out of losing with four-of-a-kind.

One more item of note regarding the OPS are two daily freerolls hosted by Carbon Poker that will award the winner of each with a free entry to the $215 buy-in Main Event set for May 17. That Main Event features a $250,000 guaranteed prize pool!

Every day at 12:00 and 20:00 from now through May 16, players can take part in the Carbon OPS Freeroll Giveaway events. There is no reason not to take a seat in the two daily freerolls and shoot for winning an entry into the $250K Main Event!