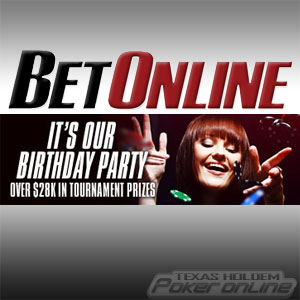 BetOnline Poker will be hosting a $50,000 guaranteed online tournament at the end of August as part of the Chico Poker Network´s birthday celebrations.

The Chico Poker Network has definitely got something to celebrate this August. In two years, traffic on the network has increased by 125%, enabling the network´s flagship site – BetOnline Poker – to improve its tournament schedule, its first deposit bonus and its ongoing promotions.

Throughout August BetOnline Poker will be putting the bunting out to celebrate the network´s birthday with increased guarantees on the site´s Saturday feature tournaments and a special “Party Favors” promotion for cash game players. To top the celebrations off, BetOnline Poker will be hosting its largest ever online tournament on Saturday 29th August with a $50,000 guaranteed prize pool.

Superb Potential for Value in the $50K GT

BetOnline´s regular Saturday feature is a $10,000 guaranteed tournament with a $22.00 buy-in played at 7:00pm (ET). There is no late registration and players can re-buy up until the first break when there is the option of an add-on. For the next three Saturdays, the buy-in is being increased to $33.00, and the guarantee going up to $15,000.

That in itself is no big deal, as players with a decent sized bankroll will still be able to re-buy when they run low on chips and comfortably afford the add-on. However, when the buy-in increases to $99.00 for the $50,000 guaranteed event on 29th August, there is likely to be a host of qualifiers playing in the tournament that do not have the bankrolls to support $90.00 re-buys and add-ons.

Therefore, for players with a suitable account balance, it is more likely that they will cash in the event – especially as BetOnline guarantees the top 30 players will be in the money. Based on the payout structure for “regular” Saturday tournaments, a min-cash should be worth $450.00 and the first prize a minimum of $12,150; so players can still make a substantial profit after entering the event, making a couple of re-buys and taking the option of an add-on – not something that will be affordable to many low buy-in satellite qualifiers!

Cash Game Players Get To Join the Party as Well

As a special incentive for cash game players to put in some extra hours at the tables throughout August, BetOnline Poker is offering “Party Favors”. The Party Favors promotion runs on selected days during the month and rewards playing with a cash prize of up to 20x the Big Blind for winning a pot with certain hands, or for losing a pot with a Jack-high flush or better (what BetOnline Poker calls a Bad Beat!).

There is no limit on the number of times a player can win a prize in the Party Favors promotion and to claim your prize all you have to do is email BetOnline´s customer support with your username and the hand number. There are a couple of terms and conditions that have to be fulfilled – for example, four players must be dealt into the hand for a Full Flush to count, and your hole cards must both be used in the formation or the winning/losing hand – but generally this is a top promotion open to players of all bankroll levels.

If you have not visited BetOnline Poker recently, you will have failed to notice the massive growth in action at the PL Omaha tables. 6-Max tables are regularly running at $2.00/$4.00 stakes, and it is not unusual to find waiting lists forming on the $1.50/$3.00 full ring tables during peak times. Further down the stakes, there is around-the-clock action at 50PL and 100PL, and games of Omaha Hi/Lo are equally busy due to these games being one of the fastest ways to clear the BetOnline Poker bonus.

If you do not yet have an account with BetOnline, you are missing out on the biggest online poker bonus available for US-facing players (and you get 120 days to clear it), plus a load of other casino, sports betting and racetrack bonuses. The unique way in which the bonus is structured allows players with less time or smaller bankrolls to clear the early stages of their bonus quickly, so that they have more money to play with at an earlier stage of their BetOnline Poker experience.

You can find out more about the bonus, the clearing requirements and what else is happening at the site by reading our BetOnline Poker review, or head straight over to the site using one of the links on this page and make your first deposit using the BetOnline Poker bonus code “POKERNEW” to take advantage of a 200% first deposit bonus up to $2,000!