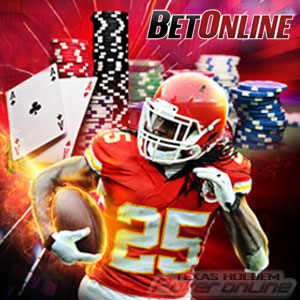 BetOnline Poker is running an NFL-themed rake race promotion throughout October that has no limit on how much money a player can add to their bankroll.

If you are a cash game player at BetOnline Poker, you should not miss the opportunity to opt into the “Build Your Own NFL Team” promotion that is running throughout October. The promotion rewards you with “players” for contributing to the rake deducted from BetOnline Poker cash games and, at the end of the month, you cash in your players for a potentially healthy cash amount.

How to Cash in the Build Your Own NFL Team Promotion

To help players get the maximum value from their teams, BetOnline Poker is running a “Halloween Special Offer” on Saturday October 31st. All throughout the day, players will be rewarded with two “Free Agents” for each $1.00 contributed to the rake. This will accelerate the rate at which “Free Agents” get converted into “Rookies” and provide a last-minute opportunity for players to earn more cash from the promotion.

BetOnline will be updating a “Build Your Own NFL Team” leaderboard daily so you can compare your progress with that of other players. There is no extra bonus for having the best NFL team at the end of the month, and maybe this is something that BetOnline Poker might want to consider if they run a similar promotion in the future!

Leaderboard Competition for Tournament Players Too

As well as the “Build Your Own NFL Team” promotion, BetOnline is running three tournament leaderboard competitions during November. Players at three different buy-in levels are awarded points for their performances in BetOnline poker tournaments, and the top one hundred players on each leaderboard will be invited to three special “Face-Off” tournaments at the beginning of November with a combined value of $3,500.

If you have been tempted to get involved at BetOnline, but have not yet taken the plunge, you should note that – for a short time only – the maximum BetOnline Poker bonus has been increased from $2,000 to $2,500. As it is a 200% match bonus on first deposits, this means that the maximum qualifying deposit is $1,250. Please note that you must use the BetOnline Poker bonus code “VIP1000” to be eligible for this enhanced offer.

Details of how to clear the bonus are included in my BetOnline Review and, because of the way in which the bonus is cleared as milestones are met, it is pretty important that you understand how the bonus is released before making a substantial deposit. My review also gives details of setting up an account, your deposit options, and what you can expect when you start playing at the site. Overall, I was pretty impressed with BetOnline Poker and, if you have any interest in building your own NFL team, I think you will be too!