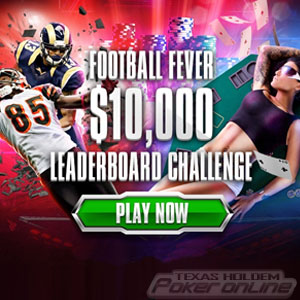 BetOnline Poker has just launched a $10,000 “Football Fever” leaderboard challenge to welcome the impending start to the 2015/16 NFL football season.

Next Thursday, the 2015/16 NFL football season gets underway when New England Patriots host the Pittsburgh Steelers at the Gillette Stadium in Massachusetts. Even before the first kick of the ball, you could be celebrating the start of the NFL season in style courtesy of BetOnline Poker.

BetOnline Poker is hosting a football-theme leaderboard challenge, in which players earn points for being dealt selected hands. Get dealt one of the selected hands and you could score a touchdown, a field goal or a safety, and be rushing up towards each week´s first prize of $500.00.

The leaderboard challenge is running for four weeks, and each week the top twenty players will share in a $2,500 prize pool. As there are no minimum limits at which players can participate in the promotion, the Football Fever Leaderboard Challenge is open to everybody playing NL Texas Hold´em cash games at BetOnline Poker.

How the Leaderboard Challenge Works

Players are awarded points for winning a hand with a Royal Flush (6 Points) or Four of a Kind (3 points), or for getting a bad beat with a Jack-high flush or better (2 Points). In order to qualify for the Points, both hole cards must be used in the construction of the winning/losing hand.

Once the hand is over, players must use the online form to register their points. BetOnline Poker will need to know the hand number, the player´s username and the type of hand that is being claimed for. The hand will be checked and, once it is confirmed as qualifying, the points will be added to the leaderboard

Players can get extra points towards their position on the Football fever leaderboard by getting multiple qualifying hands on the same day. For example, a player who wins a hand with a Royal Flush (6 Points) and then Four of a Kind (4 points) will have an extra point added to their tally. The more hands that are played every day, the better a player´s chances of picking up a major prize.

Each week´s competition runs from Monday to Sunday, with winnings credited to players´ accounts the following Monday. Week 1 is already underway (31 August – 6 September) with the remaining weeks of the Football Fever Leaderboard Challenge being played over the following dates:

Even More Promotions at BetOnline Poker

As well as the Football Fever Leaderboard Challenge, there is plenty to attract online poker players to BetOnline Poker during the month of September. In addition to the 200% first deposit bonus up to $2,000, BetOnline Poker is hosting leaderboard competitions for Sit & Go and tournament players, and running a draw that awards one hundred seats into the midweek $5,000 guaranteed tournaments.

You can find out more about what the site has to offer new players in our BetOnline Poker Review. Alternatively, head on over to the site today and create your account using the BetOnline Poker bonus code “VIP1000” and start earning points to improve your position in the Football Fever leaderboard challenge.