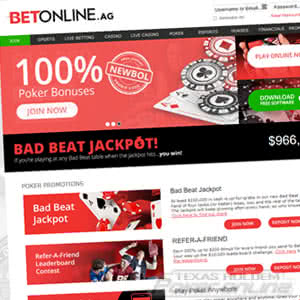 To celebrate the start of a New Year, BetOnline Poker is bringing in new products and improving its promotions in order to give players more choice in what games they play and a wider range of opportunities to enjoy a lucrative 2018.

Players who have taken a rest from playing online poker over the festive holiday season are in for a few nice surprises when they next visit BetOnline Poker. Not only has the site introduced new hyper-turbo “Windfall” Sit & Go games to the poker lobby, but also fast-fold “Boost Poker” at six different buy-in levels. There has also been a series of improvements to the site´s existing promotions, and the Bad Beat Jackpot has continued to grow over the holiday – the prize pool now stands just short of $1 million.

Players who didn´t take a break over the Christmas period will be the first to benefit from the improvements to the existing promotions due to new “Face-Off” freerolls for those who finished within the top one hundred places of the three MTT leaderboard competitions during December. The freerolls take place tonight (Wednesday) and have prize pools of $2,000 (Gold), $1,000 (Silver) and $500 (Bronze). They also have a flat payout structure so that thirty players in each event will be in the money.

The New Products are Particularly Welcome

It would be unfair to criticize BetOnline Poker for a lack of cash game variety. It is the only US-facing poker site to offer the games of Americana and 32 Card Draw, and frequently sees more action at its Stud cash tables than any other US-facing poker site. It also offers Fixed Limit Texas Hold´em in 6-Max and full ring formats, and PL Omaha Hi/Lo at stakes of up to $5.00/$10.00. Now BetOnline Poker also offers fast-fold “Boost Poker” at six different buy-in levels.

If you played online poker prior to Black Friday, you are undoubtedly familiar with the concept of “Boost Poker” and have probably played it under a different name – “Zoom Poker”. In Boost Poker, if you do not like the cards you have been dealt, you can fast-fold them out of turn and be instantly taken to a new table, where you will be dealt two new cards. Boost Poker is particularly popular at low stakes, and will help new players clear their first deposit bonuses much quicker.

The other new product is “Windfall” Sit & Go games. These are three-handed, hyper-turbo games of NL Texas Hold´em in which a random prize of up to 2,000 times the buy-in is drawn before the start of each game. The Windfall Sit & Go games can be found under a new tab in the BetOnline Poker lobby and are available with buy-ins of $3.00, $7.00, $15.00 and $30.00 (rake included). Our early experience of the games is that the mid-range prizes are drawn more frequently than at some other sites.

Plenty of Improvements to Existing Promotions

It seems as if tournament players will benefit the most from the improvements to existing promotions at BetOnline Poker. In addition to the new Face-Off freerolls, the guarantee for the site´s monthly feature tournament has increased from $100,000 to $150,000, and the prize pool for the New Players Freeroll Tournament has doubled in size from $5,000 to $10,000. The guarantees for the five daily bounty KO tournaments also appear to have increased.

The biggest of these improvements concerns the monthly feature tournament. BetOnline Poker has just about managed to avoid large overlays in these events in recent months, and is increasing the buy-in by 50% to account for the 50% increase in the guarantee. However, many players qualify for the monthly feature tournament through the comprehensive schedule of daily and weekly satellites. Nearly all of these are undersubscribed at this time of the month, giving players an easy route into the target event.

We have seen $11.00 satellites guaranteeing two seats in the target event with just five players entered. As one of the players invested in an $11.00 re-buy, the satellite generated just $66.00 in revenue and gave away seats with a total value of $218.00. There are six satellites like this running every day, and although the buy-ins have increased to $16.50 to account for the enhanced guarantee, they are packed with opportunities to qualify in much smaller fields than you will find at the end of the month.

There are plenty of good reasons to visit BetOnline Poker today in addition to the undersubscribed satellites. Due to changes in the distribution of the Bad Beat Jackpot, everybody playing at a Jackpot table when the Jackpot next hits will win a share of the prize pool, plus there will be plenty of players entering hyper-turbo “Windfall” Sit & Go games with little idea about the different strategies that need to be employed in such a fast-paced game.

If you have never played at BetOnline Poker before, you also have the opportunity to take advantage of a 200% bonus on your first deposit up to $2,500. Details of the process for claiming the first deposit bonus can be found in our BetOnline review, and – don´t forget – if you create and fund an account during January, you will also be invited to play in a New Players Freeroll Tournament in February with a $10,000 cash prize pool.