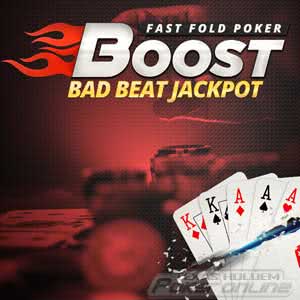 The Bad Beat Jackpot at BetOnline Poker is more favorable to players as the BBJ qualifying hand is only quad deuces and the payout has been increased by 10%.

Those changes take effect August 1 and are part of a BBJ revamp at BetOnline Poker that will see the jackpot hit more frequently, with more money landing in player pockets. Here is the new BBJ payout structure:

Those percentages have changed from time to time, but never has the administration fee been a mere 5%. BetOnline Poker is providing value to its loyal BBJ players by increasing their take by 10%. The extra cash goes to players seated and dealt in at BBJ tables.

Keep in mind that the qualifying hand for the BBJ also changes periodically and players are advised to always be aware of what that hand is by checking out the poker software banners at BetOnline Poker before playing. Generally, the qualifying hand will get easier as the jackpot rises.

Another change at the US-friendly BetOnline Poker is that the fast fold Boost tables will now have a Bad Beat Jackpot as well. The Boost BBJ is separate from the traditional No Limit Hold’em BBJ tables.

The launch of Boost BBJ has been met with a $1,000 jackpot provided by BetOnline Poker. The qualifying BBJ hand to begin the launch is only a full house – Aces full of Kings. Here is the Boost BBJ payout structure:

You’ll notice that there is no Boost BBJ administration fee as BetOnline Poker is intent on giving back to its customers. And the lower qualifying hand of a full house should result in more BBJ winners more often.

There is an element to Boost BBJ to be wary of, however, and that’s the requirement that if you happen to fast fold and move onto the next table while the Boost BBJ is hit at your table, you’re out of luck and will not share in the Boost Bad Beat Jackpot.

In other words, you may have to weigh your options as to whether or not to fold fast and be whisked away to the next Boost BBJ table, or to stick around and see if perhaps the Boost BBJ pops at your table. Poker is a game of constant decision-making and the difference between right and wrong decisions often separate the winners from the losers.

It will be fun to see how quickly the Boost BBJ increases before its hit. After being seeded with $1,000 from BetOnline Poker, 2 cents from every $1 pot with a maximum of 10 cents per pot will go toward the Boost BBJ.

The announcement of the changes to the BBJ payout structure, the lowering of the qualifying hand, and the launch of the new Boost BBJ comes on the heels of an $849,000 Bad Beat Jackpot payout at BetOnline Poker. A player with the username “dübkin” saw his quad Queens beaten by a straight flush.

Normally, a hand like that would cause a player to pull his hair out and wonder why the poker Gods hate him so. Not at the BBJ tables at BetOnline Poker where dübkin picked up a cool $148,655.05 and lots of other BBJ players also collected cash.

The new $300,000-plus BBJ is there for the taking for the next jackpot winner. If you’re not playing at the Bad Beat Jackpot tables at BetOnline Poker where new players get a 100% up to $1,000 deposit bonus, then you’re doing it wrong!