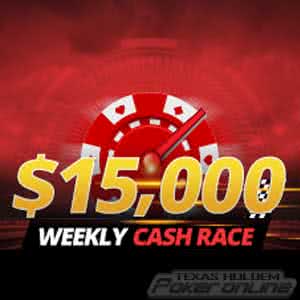 A new leaderboard race that pays out $15,000 to the top 100 finishers every week, including $2,500 for first place, begins this Sunday at BetOnline Poker.

It’s called the $15,000 Weekly Cash Race and kicks off every Sunday at 20:01 ET and runs until the following Sunday at 20:00 ET. The leaderboard competition will be in effect for a full four weeks, ending on June 16.

That means that a total of $60,000 will be paid out during the length of the promotion, with 400 players earning a bonus. Of course, all players are eligible each of the four weeks, with $10,000 the largest single amount available to be won if the same player should top the leaderboard every week.

Scoring will be done on a points system, with players earning 1 point for every $0.01 paid in rake. Points can be earned by playing any and all real money cash games, including Omaha, Boost Poker, and the popular Bad Beat Jackpot. In other words, SitNGos and MTTs are excluded from the promo.

While everyone will be aiming for the $2,500 top prize, there are other slots that feature generous payouts as well. Second place in the Weekly Cash Race gets $1,500, while 3rd place will take home $1,000.

Take a look at the prizes available each week:

The top 30 finishers each week will receive their prizes in cash – payable on Sunday. Players finishing in places 31-100 will receive Locked Bonuses that will be released in $5 increments. Every 2,500 Comp Points earned will get $5 in cash released until the Locked Bonus lands at zero.

However, all Locked Bonuses will expire 15 days after receiving the prize. The benefit to that is that it will keep players active and playing in order to unlock the bonus, while earning points toward the next $15K Weekly Cash Race at the same time.

To put it another way, players can be aiming for bonus prize money from multiple sources simultaneously. Let’s say you’re seated at a Bad Beat Jackpot table and the BBJ is hit by someone at your table. You’ll be in on that jackpot and will also be earning points toward the Weekly Cash Race.

Remember, the first week of the cash leaderboard begins Sunday, May 19. All cash game players will automatically earn points toward the contest without being required to opt in.

In order to be one of the winners of the bonus money, you may have to do some multi-tabling on the cash game tables. Playing several tables at the same time will improve your odds of landing in a payout position in the Weekly Cash Race.

If you’re already a loyal player at BetOnline Poker, get over there this Sunday to participate in the $15,000 weekly leaderboard race. If you need to open an account, there’s another stream of bonus money available via a 100% up to $1,000 Welcome Bonus for first-time depositors.