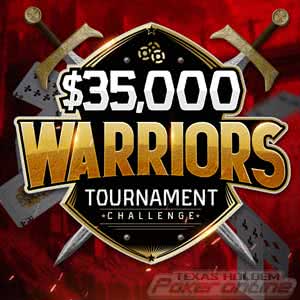 The newest promo at BetOnline Poker will pay out a whopping $35K in leaderboard prizes and freerolls as players aim to achieve the esteemed status of Warrior.

The promotion is the $35,000 Warriors Tournament Challenge and it begins on Monday, August 5. It consists of three weekly leaderboards paying out $5,000 each week and another $20,000 in guaranteed prize money over three separate freerolls.

The beauty of the leaderboard races is that points are earned for playing in a tournament, along with cashing in the event, as well as making a deep run into the top 20 of the payout field. Leaderboard points are not weighted in favor of tournament winners as the best 20 finishers all receive the same number of points.

Here’s a breakdown of the leaderboard points scoring system:

In other words, if you excel at cashing and running deep in multi-table tournaments, you have a good shot at rocketing up the leaderboard to claim the top weekly prize of $1,000. Each weekly leaderboard race awards the top 100 tournament players for the week.

Winners will receive their prizes in Tournament Money that’s available for use in MTTs and Sit & Go’s. Players are advised that Tournament Money expires in 15 days so make sure to take advantage of your winnings within the allotted time!

There’s two ways to accrue more points as you aim for leaderboard prizes. The first is to play in at least one tournament each day of the leaderboard week to begin the following week with a points boost.

The second way to earn more points is by playing at special “Warrior Boosts” tables. These tournaments award no prizes, but the winner of the event receives 20 leaderboard points. Warrior Boost tournaments last for only one hour and are played twice daily at 1:00 p.m. and 7:00 p.m. ET with a buy-in of 5,000 Comp Points.

While aiming for the top leaderboard prizes, players will also be attempting to climb up the ranks and reach the highest level known as “Sorcerer”. The lower levels are “Hunter” and “Warrior”.

The level that you reach will determine which of the three Freerolls that payout a combined $20,000 that you’ll get to play in. You can play in all three if you reach each different level in each of the three weeks.

All three Freerolls will be held on Sunday, September 1 at 2:00 p.m. ET and will conclude after 2 hours of play. Surviving players will be awarded cash amounts in proportion to their remaining chips.

Here are the guaranteed prize pools of the Freerolls:

There will also be daily Comp Point Freerolls in which players can win Tournament Money. Players can enter by exchanging their Comp Points or VIP Points while shooting for Freerolls that will pay out $5,000 each week of the Warriors Tournament Challenge promotion.

Are you ready to become a Sorcerer and win leaderboard prizes and freeroll cash? It all begins on Monday, August 5 at BetOnline Poker.