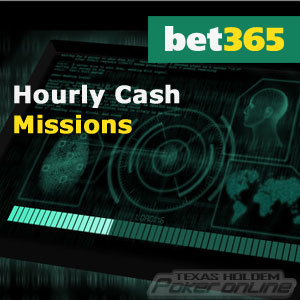 Bet365 Poker has launched an innovative new promotion in which players who reload their accounts are rewarded for attempting “Hourly Cash Missions”.

Bet365 Poker has come up with a new twist on mission promotions – “Hourly Cash Missions”. Instead of having to grind away for hours or days in order to achieve a prize in a promotion, players at Bet365 Poker get the opportunity to win a cash amount every hour of every day until June 24th.

The new promotion is exclusive to Bet365 Poker and only available to players who make a qualifying deposit into their account. Thereafter, players have to opt-in to the “Hourly Cash Missions” promotion and start earning Merit Points by contributing to the rake deducted from cash games or by paying a fee to enter a Bet365 Poker tournament or Sit & Go game.

Players at Bet365 are pretty used to collecting Merit Points to take advantage of the site´s valuable VIP Rewards program. During the “Hourly Cash Missions” promotion, not only will the Merit Points count towards their VIP status, but they will also be converted into “Coins” which need to be collected to complete each mission.

At the start of each hour, players will be advised of what their mission is for the next hour – how many Coins they need to collect to achieve the mission and what their reward will be. Players who fail to complete the mission will be awarded a prize on a pro rata basis provided they have collected at least one Coin during the hour duration of the mission.

A Couple of Terms and Conditions You Should Know

As good as this promotion is, Bet365 Poker has attached a couple of terms and conditions that players should be aware of. One of the most important is that Merit Points and Coins are not credited to a player´s mission status until their participation in a tournament or Sit & Go game has come to an end. This is obviously to stop players from registering for multiple tournaments to collect Coins and then unregistering before the tournament gets underway.

Bet365 has also asked us to publish their “Significant Offer Terms and Conditions” in this article – we think to comply with some licensing requirement, but it is just as well that players are aware of them:

It is also possible that you may forfeit any cash award from the promotion if you fail to log into your Bet365 Poker account for seven days after being awarded a prize in the promotion. We don´t understand why Bet365 should insist on this rule, but it is easy enough to do – especially if you have the Bet365 Poker app installed on your mobile device.

Are You Going to Attempt the Hourly Cash Missions?

If you fancy a go at winning some free poker money at Bet365 Poker, remember that you have to make a qualifying reload deposit and opt-in to the promotion. If you are not already playing at Bet365 Poker, you could also qualify for a £/€100 poker bonus on your first deposit.

Bet365 Poker is particularly user-friendly to new players and allocates “Beginner Tables” for novice players to develop their skills. This is just one of the reasons why we described Bet365 Poker as one of the best poker experiences around for both new players and experienced players in our review of Bet365 Poker; and the site just moved up our “must-play” list with the introduction of “Hourly Cash Missions”.

Win a prize every hour of every day with Bet365 Poker´s “Hourly Cash Missions” (but only until 24th June).