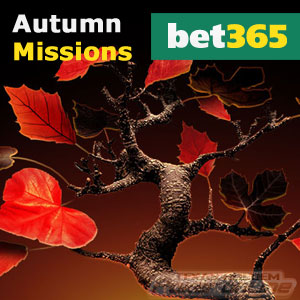 Bet365 Poker is hosting a €100K Autumn Missions promotion with qualification criteria that is easier to achieve than other skins on the iPoker Network.

Throughout the year, the majority of skins on the iPoker Network have been hosting similar mission-based promotions in which players have to complete challenges in order to win a seats in daily and weekly All-In Shootouts.

From time to time, certain skins have added their own touches to the promotions to complement their unique market-base or standalone promotions. However, no online poker site has ever deviated from the “norm” as much as Bet365 Poker is during November.

Although the format of the €100K Autumn Missions promotion is the same as elsewhere on the iPoker Network, the tasks being set to players are much easier to achieve – not only in the daily missions, but in the weekly missions too. The outcome is that, if you want a better chance of profiting from the Network´s Autumn Missions promotion, the best place to take on the missions is at Bet365 Poker.

Each day until 27th November, players can opt to take on one of two missions – an “easy” mission or a “hard” mission. Players who complete the “easy” mission will be rewarded with a ticket to an All-In Shootout with €500 in cash prizes for the top fifty players (€10 each). Players who complete the “hard” mission will receive an entry to a €1,500 All-In Shootout in which the top thirty players win €50 each.

The missions can only be completed in cash games of NL Hold´em (except heads-up games), Speed Poker or 6Plus Hold´em with a minimum stake level of €0.05/€0.10. The €500 All-In Shootouts take place at 7:00pm GMT each evening, with the €1,500 All-In Shootouts taking place ten minutes later. Although players do not have to be physically present to play in the Shootout events, manual registration to each event is necessary.

While the daily missions are underway, Bet365 Poker is also asking players to complete weekly missions. These consist of playing the site´s three-handed, hyper-turbo Twister games and again, there are “easy” weekly missions and “hard” weekly missions. Please note that you can only opt into one of the missions each week. If you complete the easy mission, you cannot take on the hard mission in the same week.

We mentioned at the beginning of this article that the tasks being set for players in Bet365 Poker´s Autumn Missions are much easier to achieve than on other iPoker Network skins. Here are some examples.

One other important note to watch out for is that other iPoker skins stipulate qualifying games of Twister must be played at stake levels of €2.00 or higher in the easy mission, or stake levels of €5.00 or higher in the hard mission. Bet365 Poker has no minimum stake requirements for either weekly mission in its terms and conditions. We suggest that you double-check the missions section of the poker client for a late addition to the terms and conditions before you take on the “easier” €100K Autumn Missions at Bet365 Poker.