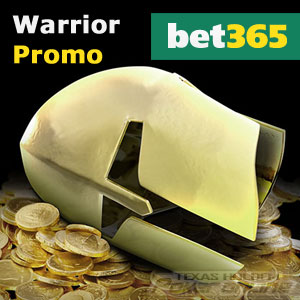 Bet365 Poker has started 2016 by offering players two fantastic promotions for January – a new series of Monthly Missions and a Warrior rakeback challenge.

Bet365 Poker is offering players two very different ways to boost their bankrolls throughout January, with a new series of Monthly Missions to appeal to recreational players and a Warrior rakeback challenge for those with a few more hours to spend at the tables.

Both promotions are offered in addition to Bet365´s first deposit bonus and valuable VIP rewards scheme, meaning that it could be possible to start 2016 with several thousand more Euros in your account than were in it at the end of 2015. Furthermore, you can participate in both promotions through the Bet365 Poker mobile app.

The January Monthly Missions are very straightforward. Simply get dealt a pocket pair of a specific value at any NL Texas Hold´em cash table (excluding heads-up tables) and be awarded a ticket for an “All-In Shootout” with a €1,000 prize pool. If you are dealt the qualifying pocket pair during Bet365 Poker´s “Happy Hour” (8:00pm – 9:00pm GMT), you will also win an entry to a €500 freeroll.

Tickets for the “All-In Shootouts” and the €500 freeroll are awarded automatically provided you have opted into the promotion, but you will have to enter each event manually. Unused tournament tickets will expire at the end of the January and have no redeemable value. The good thing about the “All-In Shootouts” is that you do not have to be logged into your account to play in the tournaments. You can just enter the events and be pleasantly surprised when your bankroll has increased in the morning.

Bet365 Poker´s Warrior Challenge is also straightforward and every player is eligible to take part. All you have to do is play poker at Bet365 and, at the end of the month, the total amount of rake and tournament entry fees you have paid will be calculated.

Overall the two promotions – plus the benefits of the VIP rewards scheme – could prove very lucrative to players irrespective of their bankroll and the amount of time they have available to play poker at Bet365. Just remember to opt in to each promotion to maximise your chances of enjoying a very happy New Year from Bet365