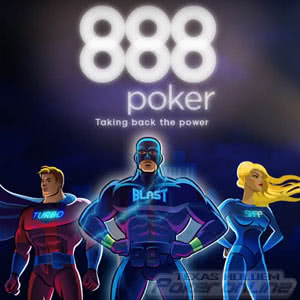 Players at 888 Poker have the opportunity to win tournaments entries, poker bonuses and up to $100,000 in cash every day in the site´s new promotion.

Throughout September and October, there are some fantastic opportunities to win valuable prizes in 888 Poker´s Action Squad scratchcard promotion, and every player has a chance of winning something. In fact, it would be very difficult for any players participating in the promotion to reach November without adding to their bankrolls.

Like recent promotions at 888 Poker, the Action Squad scratchcard promotion involves completing challenges in order to win entries into special tournaments. Each special tournament has a cash prize and offers players the opportunity to advance into more valuable tournaments, win poker bonuses and cash prizes up to $100,000 every day.

Every day until November 5th, players will be set four challenges each day. The challenges consist of playing hands of the site´s new Flopomania game, playing hands of SNAP poker, winning BLAST tournaments, or competing in Sit & Go games and tournaments with a total buy-in of $8.00. On the completion of each challenge, players will be awarded scratchcards with which they will win one of the following prizes:

Around four out of five times, players will win an entry into an Action Squad tournament. These take place at 11:10am, 2:10pm and 6:10pm (all times GMT) and are either BLAST, Snap or Turbo Tournaments. Each has a prize pool of $3,000 and will award the top 888 players in each event with a second scratchcard in addition to their cash prizes. The prizes on the second scratchcard consist of:

Around half the time, players will win an entry into the weekly Ultimate Hero tournament. This is a “regular” tournament with a cash prize pool of $10,000 and a deep payout structure that is held at 7:30pm each Sunday up until November 12th. Player who win a free poker bonus have 60 days in which to clear the bonus at the regular turnover rate of 3.5 Poker Points per $1.00.

Extra Prizes to be Won in the Superhero Spinner Promotion

In addition to the prizes that can be won in the Action Hero Scratchcard promotion, 888 Poker is also giving players the opportunity to win extra prizes in a Super hero Spinner promotion. The first time players log into their accounts each day, they will be invited to spin the Superhero Spinner and win a tournament entry ticker, poker bonus, cash prize, sports bet or casino freeplay.

Players who have downloaded the 888 Poker mobile app have the opportunity to win a second prize each day by logging into their accounts from their mobiles between 5:00pm and midnight and spinning the Superhero Spinner again. However, in order to be eligible to take part in either promotions, players must have made a real money deposit into their accounts.

Are You Ready to Unleash Your Inner Hero at 888 Poker?

If you already have a funded account at 888 Poker, head on over to the site today to find out what your challenges are. If you do not yet have an account with the site, read our 888 Poker site review to find out what other opportunities you may be missing out on. If you fancy creating a real money account with the site, you should also read about our exclusive 888 Poker bonus that enables you to claim a 100% bonus on your first deposit up to $600 rather than the $400 bonus offered by the site.