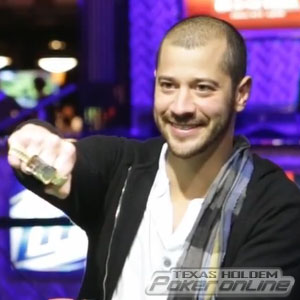 On Monday night, the man with the hardest name to pronounce in poker took down gold in an event similar to the one he won two years ago; $1,500 No Limit Hold ‘em Poker. With a final table stacked with big name pros and former champions, Event #17 featured some of the best poker moments thus far at the WSOP, as Polychronopoulos was forced to sweat and luck-box his way towards a hard-earned victory and over $518k in prize money.

Smaller buy-in events at the WSOP are known to draw a ton of hopefuls, and Event #17 was no different as 2,105 players looked to cement their place among the poker gods. But given the relatively short starting stacks, most were eliminated faster than they could say “all-in.” In fact, after only one day of play over 1,800 players had fallen, with another nearly 300 to follow on Day 2. By the time action resumed on Day 3, 15 players remained, almost all of whom had an accomplished poker resume.

Perhaps the most notable name at the final two tables was the “Robin Hood of Poker,” Barry Greenstein. Unfortunately, it was not meant to be for the three-time bracelet winner, as he was knocked out in 11th place, just shy of making her 18th final table. Greenstein was ultimately done in when his A-3 of clubs fell to David “Bakes” Baker’s K-Q.

Astoundingly, it was Baker’s third final table appearance this summer. Also at the final table was 2009 Main Event winner Joe Cada. Wanting to prove that his much criticized win was more than just a fluke, Cada silenced the naysayers by making his second final table of this year’s WSOP, and 3rd since defeating Darvin Moon for the championship four years ago. Cada would suffer a bad beat at the hands of the eventual winner when his A-Q was out-turned by Polychronopoulos’s A-J. He received $161k for his 4th place finish. Other notables at the final table included Joe Ward, and circuit grinder Everett Carlton.

Shorting after busting Cada, Polychronopoulos would lose a flip to Carlton, but from thereon out, the poised pro could do no wrong. Soon after, he got his revenge against Carlton as his dominant A-Q held over Carlton’s A-6, eliminating Carlton in third place.

Going into heads-up play against Germany’s Manuel Mutke, Polychronopoulos held a 5:4 chip lead. Given the huge blind-to-stack ratios, it seemed unlikely that the match would last too much longer, but no one could have predicted that it would be over in a mere three hands.

On the 185th hand of the final table, Polychronopoulos raised to 250k with Q-J and was three-bet to 650,000 by Mutke. Polychronopoulos tanked and made an extremely loose four-bet all-in. Mutke snapped him off with A-J, and was in great position to take a massive chip lead. But it was not meant to be, as Polychronopoulos spiked a three-outer (Q of clubs) on the river for the win. Suffice to say, the crowd went wild.

So in the end it was not only skill, but luck, that propelled Polychronopoulos to victory, proving once again that poker is not a game for the faint of heart. As the saying goes, “If you can’t stand the heat, stay out of the kitchen.”