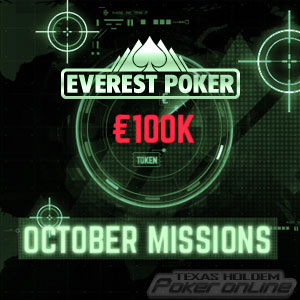 Everest Poker is running a series of weekly Missions and Challenges throughout October that will see players competing for their share of €100,000.

There is something for everyone in this month´s “October Missions” at Everest Poker – a series of challenges in which players are rewarded with tickets to daily “All-in Shootouts” and valuable weekly freeroll tournaments.

Most of the challenges require that players simply continue doing what they are doing at Everest Poker – competing in online poker tournaments – although to qualify for some of the bigger prizes, it will be necessary to make a small reload deposit.

Week 1 of the October Missions is already running, so don´t delay in visiting Everest Poker today; and – if you are not already playing at the site – carry on reading to see how you can get a 200% match bonus on your first deposit up to €1,500.

The first week´s mission is to make a deposit of at least €10.00 and play in one of the iPOPS Micro tournaments that are running until the weekend. Players who complete this challenge will be entered into a €25,000 freeroll tournament scheduled for Sunday 4th October at 7:30pm (CET)

The second mission gets underway next Monday and rewards any player who cashes in a scheduled multitable tournament with a seat in a €1,000 “All-in Shootout”. Players who cash in three tournaments on separate days will win a seat in a €15,000 freeroll tournament on Sunday 11th October.

The “MTT Trio” challenge gets underway on Monday 12th October. Players are required to deposit at least €10.00 and enter three scheduled tournaments during the week for a seat in the following Sunday´s freeroll which will give away €25,000 worth of tickets to the iPOPS Mini Main Event on Sunday 25th October.

Qualify for Live Events with Everest Poker as Well

Ten packages to Rozvadov and twenty packages to Amsterdam are up for grabs, and with the qualifying routes starting at just €1.00, this is an excellent opportunity to qualify for some live action this fall in Europe for a minimal buy-in.

Saving the best until last, Everest Poker is offering new players the opportunity to springboard their poker bankroll with a 200% match bonus on first deposits up to €1,500. The bonus is weighted so that he first €20.00 is ridiculously easy to clear, and after that it is a question of how much time you can spend at the tables in the sixty days that are available to clear the remainder.

The 200% bonus is not the only benefit available to new players. Everest Poker is offering €10.00 of free tournament tokens, entry into a €2,000 freeroll tournaments and a head start into the VIP Rewards program. There is also a Shasta “Steps” promotion that is free to enter for ninety days plus a stack of other benefits you can read about in our Everest Poker review.