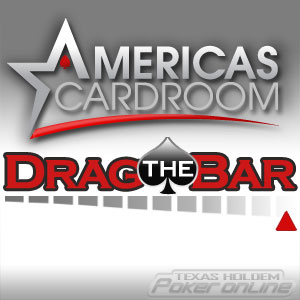 The standard of play at Americas Cardroom is about to receive a boost with the arrival of free poker training for all players from “Drag the Bar”.

Drag the Bar is one of the world´s leading poker training programs and has previously has only been available to players via subscription or as a promotion to players at PartyPoker or Carbon Poker who collect a substantial number of Player Points every month.

Now, thanks to a deal between Americas Cardroom and the training site, Drag the Bar poker training will be provided free of charge to all players on the site – giving new and existing players the opportunity to improve their game without having to meet predetermined criteria.

Drag the Bar Acquisition Leaked on 2+2

The news that Americas Cardroom was leaked on the 2+2 poker forums by former owner Hunter “BeachJustice” Bick. Writing in the coaching advice section of the forum, Bick apologized to Drag the Bar members for the downtime that the site has been experiencing recently, and explained it as:

Its been a little bit hectic as we’ve been completing the sale of DTB to the Winning Poker Network. WPN is going to make DragTheBar 100% free to everyone, while keeping all the same coaches on board and existing content on the site. It was always a goal of ours at DTB to make poker training accessible to everyone, and we’re very happy that WPN is finally making that possible.

A spokesperson from the Winning Poker Network later confirmed the acquisition of the Drag the Bar website, which has already been bannered-up with the Americas Cardroom logo.

Plenty of Well Known Faces on Drag the Bar

Players at Americas Cardroom will already be familiar with some of the faces providing coaching and advice at Drag the Bar. One of the existing team members – Owen Gaines – is well known among the poker community for his posts on 2+2 and in Drag the Bar under the pseudonym of “QTip”.

Gaines plays under the screen name of “MamaCoolJ” at Americas Cardroom and is frequently near the top of the “Beast” leaderboard – mostly thanks to having an extraordinary set up which allows him to play up to forty-five tables simultaneously.

What Effect Will the Free Poker Training Have?

There will likely be two effects of free poker training at Americas Cardroom – the standard of play will improve and the volume of traffic will increase. According to our Americas Cardroom review, the site was once known as “Donk City”, but the standard of play has increased since then as more players use poker tracking software to their advantage.