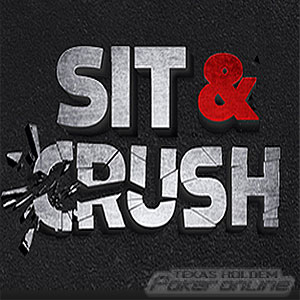 Americas Cardroom is “reloading” its popular Sit n Crush leaderboard competition by adding $2,500 to the prize pool each week for the next thirteen weeks.

“Sit n Crush” is a leaderboard competition like no other. Players are awarded points for competing in Sit n Go games – rather than how they perform in them – with the top players each week being rewarded with cash prizes and tournament entry tickets.

The Sit n Crush prize pool is funded by Americas Cardroom, with a quarter of the fee paid to enter a Sit n Go game being allocated to the pool. Due to the popularity of the leaderboard competition, the prize pool frequently tops $10,000 each week and, for the next thirteen weeks, Americas Cardroom is adding a further $2,500 each week.

The purpose of the “Sit n Crush Reloaded” promotion is to get more low buy-in players to the Sit n Go tables, and Americas Cardroom is aiming to do that by offering points multipliers to specific types of Sit n Go games with a buy-in of less than $30.00.

Players who compete in the site´s low buy-in “On Demand” games – Sit n Gos which start when a pre-determined number of players have entered and then continue with a tournament format – will benefit the most from the “Reloaded” promotion, as will fans of “regular” 6-Max and nine-player Sit n Gos.

There are also points´ multipliers for turbo and hyper-turbo Sit n Go games, but no more than the usual number of points for players in “Double or Nothing” Sit n Go games. The bad news for HUSNG players is that this format of Sit n Go is excluded from the Sit n Crush Promotion.

How to Get Bonus Sit n Crush Points

Points in the “non-promotional” Sit n Crush leaderboard are awarded depending on the value of the fee that is paid to enter a Sit n Go game. So, for example, if a player was to enter a $5.00 + $0.50 Sit n Go, one quarter of the fee ($0.0125) would be contributed to the prize pool and the player awarded 1.25 points. The only exception to this being for players who register before the start of an “On Demand” game, who would receive double points (2.50).

During the Sit n Crush promotion, players who enter “On Demand” and “regular” Sit n Go games with a buy-in of less than $30.00 will be awarded double the usual number of points, while those who play in Turbo or Hyper Turbo games will have their points increased by 1.5. For players who play Sit n Gos with a buy-in of $5.00, the following table shows how to get bonus Sit n Crush points:

Americas Cardroom has also introduced two “Happy Hours” either side of its Monday to Friday peak periods. During the two Happy Hours – from 6.00pm (ET) to 7.00pm (ET) and 11.00pm (ET) to Midnight (ET) – all the Sit n Crush points awarded in any Sit n Go game (except HUSNGs) will be doubled.

Who Wins All the Extra Money?

The $2,500 “Reloaded” bonus cash is going to be distributed between the top thirty-five “Sit n Crush” players each week on top of the normal leaderboard cash prizes and tournament tickets that are awarded for every $55.00 in the prize pool.

In fact, the tournament tickets could potentially be more valuable than the cash prizes for – up until Americas Cardroom´s “Winning Millions” tournament on 14th December – the tournament tickets given away are for a special “Sit n Crush qualifier” to the $1 million guaranteed event. The qualifiers guarantee seven seats in the target event and recently have been undersubscribed – offering players a better chance of winning a seat in the target event.