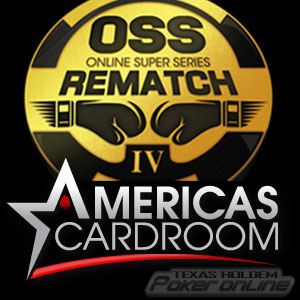 Americas Cardroom has announced that it will be re-running its “troubled” Online Super Series IV in the run up to the next Winning Millions event in February.

Last month´s Online Super Series IV was blighted with Internet connectivity problems caused by alleged DDOS attacks that resulted in the cancellation of the $1 million guaranteed “Winning Millions” tournament as well as several other events.

At the time the original “Winning Millions” tournament was cancelled, a second “Winning Millions” event was announced for 22nd February; and now Americas Cardroom has revealed that it will be complimenting the feature event with a re-run of the Online Super Series IV.

The original Online Super Series IV was scheduled to run from Friday 5th December through to Sunday 14th December and consisted of sixty-two events guaranteeing a prize pool of $1.75 million. The re-run of the Series will maintain the same schedule, but with the addition of a $300,000 guaranteed “Second Chance” tournament that gets underway two hours after the cards are in the air for the “Winning Millions” event and raises the total value of the series to beyond $2 million.

There is also a special bonus available for players that qualify for the “Winning Millions” event through Americas Cardroom´s comprehensive satellite schedule. The first 500 players to book their seats in the “Winning Millions” event will also be rewarded with a free seat in the “Second Chance” tournament – an incentive to qualify early for the feature event if ever there was one!

Americas Cardroom will also be running its intended leaderboard competition alongside the re-run of the Online Super Series IV, with $1,000 in cash prizes up for grabs for the three top performers in the Series. Only the events which form part of the Online Super Series IV will count towards the leaderboard competition (not satellites into the events), but there is no reason to stop you qualifying earlier for the tournaments and booking your seats in probably the best online poker series for US players.

Players on Americas Cardroom do not have to wait until February to compete in high-value tournaments, as this weekend the site is doubling up the guarantee on its regular Sunday $50K tournament to $100,000. Although the guaranteed prize pool is being doubled up in value, the $215.00 buy-in remains the same – so expect a big field for this re-entry tournament that gets underway at 7:00pm (ET).

Players with limited bankrolls can qualify for the $100,000 tournament from as little as $1.00. Each hour (at 35 minutes past the hour), Americas Cardroom is hosting a sub-satellite with a $1.00 buy-in that guarantees a minimum of one seat into a daily final @ 6:00pm (ET) each day. The daily final (which can also be bought into directly for $24.00) guarantees a minimum of two seats for Sunday´s event, but as the $100,000 guaranteed draws closer, you can be sure that these will be popular satellites with more seats on offer.

What Else is Going on at Americas Cardroom

In addition to the Online Super Series IV and the $100,000 guaranteed tournament, Americas Cardroom has just released a new tournament schedule for 2015 which includes a “Progressive Guaranteed Sunday Tournament” which was launched last night with a guarantee of $25,000 and which will increase in value by $5,000 each week that the guarantee is hit (like it was yesterday when 256 players ponied up the $215.00 buy-in to create a prize pool of $51,200).

Cash game players are also being given a New Year bonus with the addition of $80,000 to the “Beast” prize fund throughout January, while the site´s “Sit n Crush Reloaded” promotion carries on until February. You can find out more about these promotions and the other benefits of playing at the site by reading our our Americas Cardroom review and by using bonus code “THPOBONUS” to qualify for a 100% match bonus on first deposits of up to $1,000.

STOP PRESS: Americas Cardroom has also announced that its nosebleed high stakes cash game – the “Cage” – will return on Wednesday 14 January at 8:00pm (ET). The game – which has a buy-in of $5,100 – is a four-hour battle played over three levels with blinds increasing every 80 minutes. Two versions of the Cage will be played simultaneously – NL Texas Hold´em and Pot Limit Omaha – and satellites are already running in the Americas Cardroom client.