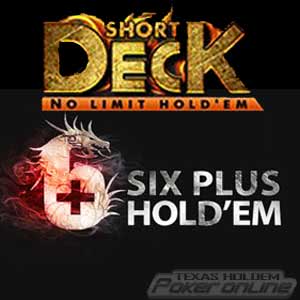 Online poker players at Americas Cardroom and PokerStars will soon be treated to a new poker variant as both sites appear to be on the verge of launching separate versions of “Short Deck Poker,” which is also commonly known by the name of “Six Plus Hold’em.”

Short Deck Poker is played with 36 cards, with card values of 2 through 5 removed from the 52-card deck, leaving only cards valued six through ace. The game is similar to Texas Hold’em, but the hand rankings have been modified in order to account for the changes in probabilities of making certain hands as a result of playing with less cards.

For instance, hitting a straight becomes more likely due to the cards valued deuce through five being removed. On the other hand, flushes are harder to make because there are only nine cards of the same suit, as opposed to 13 in a regular deck of 52 cards.

Therefore, the hand rankings from best to worst in Six Plus Hold’em are as follows:

As you can see, three of a kind tops a straight, and a flush beats a full house in Short Deck Poker.

It’s important to note that Six Plus Hold’em is generally regarded as a game that creates more action because of the increased likelihood of being dealt stronger hands. This may, for the time being at least, tip the scales a bit in favor of recreational players, in comparison to traditional Texas Hold’em.

Americas Cardroom on the Winning Poker Network sent an email to their loyal customers informing them that Short Deck Poker will be available at cash tables in heads-up, 6-max, and 9-max formats sometime later this month. It’s part of the poker room’s plan to shine a spotlight on new, innovative games.

The same email also mentioned that ACR will be running a bunch of promotions this month beginning on September 3 with a new weekly tournament schedule. A massive $1,000,000 in guaranteed prize pools has been added.

While the new schedule features brand new tournaments such as a High Roller, it also includes increased guarantees on existing and popular events. The Sunday majors such as the Sunday Warmup and Sunday Special are a couple of the tournaments that will experience a boost in guarantees.

PokerStars Hints at Six Plus Hold’em

While Americas Cardroom confirmed that Short Deck Poker will make its debut in September, no such announcement has been forthcoming from the brass at PokerStars. However, some eagle-eyed players noticed that table images of Six Plus Hold’em appeared on the poker client at the world’s top real money poker site.

It’s par for the course for PokerStars, as recent launches of new games called “Showtime Hold’em” and “Split Hold’em” were followed by the more permanent poker variant “Unfold Hold’em.” It makes sense that the popularity of Six Plus Hold’em at live poker venues has caught the eye of the research and development team at PokerStars.

That popularity began growing after Short Deck Poker made its debut at some of Asia’s high stakes cash tables roughly three years ago. The game was promoted by top poker pros such as Tom Dwan and Phil Ivey, resulting in interest being heightened among others in the world of poker.

A few lesser known poker sites have since spread Six Plus Hold’em, but no poker rooms anywhere near as large as PokerStars and Americas Cardroom. That is, until now. We hope that more online poker sites will follow this trend and add Short Deck Poker to their game variations soon.