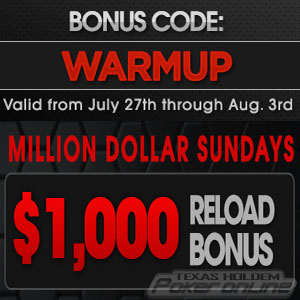 It is a big week at Americas Cardroom. This coming Thursday, the site starts its Million Dollar Warm Up tournament series – with forty-seven valuable tournaments crammed into the space of four days – and, on Sunday, it is the daddy of them all – the $1,000,000 guaranteed Million Dollar Sunday event.

Ahead of the most valuable online poker tournament of the year for US players, Americas Cardroom is offering players a generous reload bonus of up to $1,000. However, the bonus is not like most other bonuses that you read about – its tiered structure rewards higher depositors with a bigger bonus and allows them more time to clear it.

How the Warm Up Reload Bonus Works

Existing players should visit the secure Americas Cardroom cashier and make their deposit using the Americas Cardroom bonus “WARMUP”. The value of the bonus and the length of time available to clear it depends on the amount deposited:

The Americas Cardroom Warm Up reload bonus is released in increments of $5.00 every time a player collects 120 Award Points. Award Points are awarded at the rate of 5.5 per $1.00 paid in rake or tournament entry fees, so the effective rakeback rate is almost 23%.

In addition to the hundreds of satellites offering seats into the $1,000,000 guaranteed tournament next Sunday, Americas Cardroom is running a “Million or Bust” Jackpot Poker promotion in which players can win a seat (without playing a hand of poker) for just $12.00.

“Million or Bust” Jackpot Poker is similar to the site´s regular Jackpot Poker games inasmuch as a random prize is drawn for the three-handed hyper-turbo game when three players have registered; but, rather than award a random cash prize of up to 2,500 times the buy-in to the winner, the prize distribution is as follows:

The “Million or Bust” promotion has been running just short of a week, and already three players have won their seats into the Million Dollar Sunday tournament by playing “Million or Bust”. “HEEEEPS”, “gurden”, and “POppInOff” were the lucky players on that occasion, but with the Jackpot due to hit 5 times in every 100,000 games, there could be plenty more winners before the $1 million game gets underway.

If you are not already playing at Americas Cardroom, you will not be eligible for the Warm Up reload bonus. However, you can take advantage of a 100% match bonus on first deposits by using the Americas Cardroom bonus code “THPOBONUS” when first registering your account.

Please note that the bonus code has to be entered in the bottom field of the first page of the account registration process in order to get the full benefits of registering an account with Americas Cardroom (we have a screen shot available on our Americas Cardroom bonus code page).

By using the Americas Cardroom bonus code “THPOBONUS” when first registering your account, not only will you be eligible for the first deposit bonus of up to $1,000, but also receive entries in up to four free-to-enter depositor´s tournaments plus you will receive your first Combat Point to be used in Americas Cardroom´s exceptionally rewarding “Elite Benefits” program.