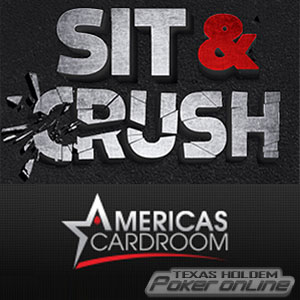 “Sit n Crush” will appeal to players who enjoy playing Sit n Go tournaments and, unlike the Beast progressive rake race, no additional money is paid by players who want to participate in the promotion.

Players earn points just for playing in Sit n Go events – irrespective of where they finish in the game – with 25 percent of the regular fee charged for participating in the event being designated towards a “Sit n Crush” prize pool.

The more Sit n Gos that players participate in, the more points are earned and the players with the highest number of points will be rewarded with cash prizes and tournament vouchers for seats in Americas Cardroom´s feature events.

Sit n Go Crush points are awarded according to the value of the Sit n Go tournament, at a rate of 5 points per dollar contributed towards the prize pool. Therefore, in a standard $10.00 + $1.00 nine-max Sit n Go, $0.25 of the $1.00 entry fee will be allocated to the prize pool and each player will receive 1.25 points.

A higher points value will be awarded for players participating in Americas Cardroom “On Demand” Sit n Go games, with all players playing in the On Demand games receiving double points, while “Early Birds” – those who register for an On Demand game before it gets going – will receive quadruple points.

Please be aware that Americas Cardroom charges lower fees for playing “Turbo”, “6-Max”,and “Double or Nothing” Sit n Gos, so the entry fee on a $10.00 tournament will not always be $1.00 and points will be awarded accordingly (Please note, HUSNGs are not included in the promotion).

Who Gets Paid What?

When Does the Promotion Run?

This is a really good opportunity for low-stakes players and recreational players to get something back from Americas Cardroom, as the highest volume of Sit n Go games are played at micro and low stakes, and at peak times. Consequently the high stakes multitablers will not find it so easy to climb to the top of the leaderboard and keep all the decent prizes for themselves, as they often do with Americas Cardroom´s “Beast” rake race.