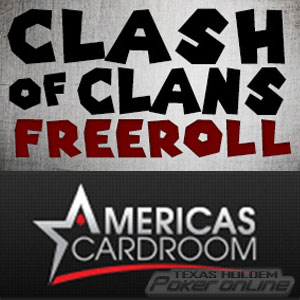 Players of the strategy game Clash of Clans should get over to Americas Cardroom, where the site is giving away thousands of Gems in a freeroll promotion.

Clash of Clans is an incredibly popular multiplayer strategy/combat game for iOS and Android mobile devices, in which the aim is to protect and develop your village while battling other clans until you become the leader of the ultimate master clan.

Players worldwide can compete against each other – or join forces with other players – to earn accolades and trophies for being the most accomplished clan leader. The game is free to play, but many players find it an advantage to collect/earn/steal gems from their online opponents in order to buy resources to finish upgrades or increase a hero´s healing rate.

Now Americas Cardroom is giving players the opportunity to WIN Gems in a series of free-to-enter poker tournaments, in which the popular US-friendly poker site will be giving away 125,000 gems over a twenty-day period.

The Gems will be distributed in “sacks” of 2,500 Gems to the top five finishers in each of ten freeroll tournaments and, with no limited on the number of tournaments that can be entered, a player successful in each of the ten tournaments could win as many as 25,000 Gems.

Americas Cardroom “Clash of Clans” freeroll promotion is exceptionally straightforward. There is no buy-in to the tournament and it is not necessary to make a deposit before players are eligible to take part in the promotion.

Visit the Americas Cardroom poker client, visit “Tourney” > “Freeroll” and you will find the following tournaments listed under “Clash of Clans – 125,000 Gem Giveaway”:

If you are not already a player at Americas Cardroom, simply visit the website through our link below, download the free software and register an account using ACR Bonus Code “THPOBONUS” to qualify for a 100% match bonus on your first deposit (up to $1,000!).

Clash of Clans Not the Only Promotion at Americas Cardroom

The Clash of Clans promotion coincides with two other promotions currently running on Americas Cardroom – “The Beast Unleashed” and “Sit n Crush Reloaded”.

The Beast is a weekly rake race on Americas Cardroom in which players who put in the most volume at the site´s cash tables are rewarded with cash prizes and tournament entry tickets. During the six weeks of “The Beast Unleashed” (which started last Saturday), each week´s prize pool is being bumped up by $10,000 to add even more excitement to the race to the top of the leaderboard.

Sit n Crush is a similar leaderboard race, but for “Sit n Go players. Points are awarded not for how each player performs at the tables, but for how many Sit n Go games they enter – with bonus points being awarded for competing in Americas Cardroom “On Demand” Sit n Gos. During the promotion period, each week´s prize pool is being enhanced by $5,000.

Americas Cardroom has a history of popular and challenging promotions and its “Clash of Clans” freeroll promotion is certain to attract poker players who can use optimum strategies to triumph over their opponents – so it should be attractive to most poker players!