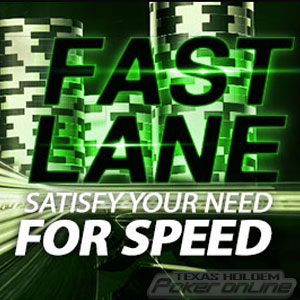 Fast Lane is Everest Poker´s latest monthly mission-based promotion in which players are invited to complete missions in order to qualify for daily and weekly All-In Shootout tournaments. As with previous months, there is a selection of missions to choose from each day, and – during the Fast Lane promotion – Everest Poker has made it easier for tournament players to get involved.

In Everest Poker´s Fast Lane promotion, players have the choice of tackling a cash mission, a Twister mission or an MTT mission each day. As usual, the cash missions and Twister missions vary according to the day of the week. The only variation in the MTT missions is that the required minimum buy-in for qualifying missions on a Sunday is €10.00. The full list of available missions are as below:

Please note that the cash game missions can only be completed in NL Hold´em cash games or on Speed Poker tables with a minimum blind of €0.05/€0.10. No heads-up play qualifies for the completion of a cash game mission and, as the missions are easier to complete on PLO and 6+ Poker games, these look to also have been excluded from the promotion.

Players attempting the Twister missions should also note the distinction between “Play” and “Win” on certain mission days and the different qualifying buy-ins. It is also important to note that manual registration is required for the daily and weekly All-In Shootout events although, as every player will be all-in every hand, it is not essential for players to be physically present to play in the tournaments.

The Fast Lane promotion starts this week and runs until Sunday 26th February. During that time, €68,000 will be given away to players who complete the daily missions and cash in the All-In Shootouts. Both the daily and the weekly All-In Shootouts have a “Super Flat” structure that pay roughly 30% of the field, so most players should be able to pick up something in the “Fast Lane” promotion. Make sure you take full advantage of the opportunity to accelerate your bankroll and visit Everest Poker today.