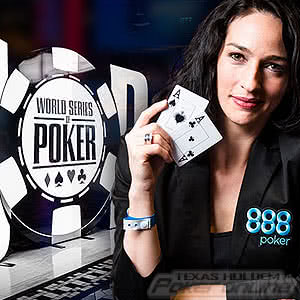 Nearly every poker player dreams of winning their way into the WSOP Main Event via a cheap satellite and then making a deep run in the tournament to become a millionaire. That dream is alive and well at 888poker where 2018 WSOP Main Event prize packages are waiting to be claimed.

The prize packages are worth $12,600 and include the $10,000 WSOP Main Event buy-in, five luxurious nights stay at the Vdara Hotel, and $1,050 kicked in for travel expenses. The entire package can be won for as little as one penny ($0.01) at 888poker by working your way through step satellites.

Do you think it can’t be done? A player named Tommy Yates did exacty that in 2015, qualifying for the Main Event by entering a satellite for a single cent. Yates eventually landed in 486th place, taking home $19,500. How’s that for a return on his penny investment?

Unfortunately, Yates has since passed away. But not before he proudly wore an 888poker patch and mixed it up with the big boys on poker’s biggest stage at the Main Event. Who will be the next player to follow that same path, and perhaps make an even deeper run to the final table and a million-dollar payday?

Keep in mind that players are permitted to enter 888poker’s Step tournaments at any level. It’s not required to start at $0.01. For instance, you can elect to buy-in for $5, dip into your pockets a little deeper and enter for $30, or even step up to the next level at $160. Doing so eliminates some of the lower steps and is quite popular among players with bigger bankrolls.

Here are the 6 steps with corresponding buy-ins and the prize tickets to the next step:

The 2018 World Series of Poker gets underway this week at the Rio All-Suite Hotel & Casino , but the Main Event won’t begin until July 2. That gives players the whole month of June to get on over to 888poker and take a shot at winning a $12,600 prize package.

If shooting for the WSOP Main Event seems a bit too lofty of a goal, 888poker players also have the option to win a package to the WSOP Crazy Eights event. It’s crazy because the tables are eight-handed, the buy-in is $888, and the winner is guaranteed $888,888 in prize money.

Are you the next Tommy Yates, turning a penny into a nice score at the WSOP? Or do you fancy yourself more as a Chris Moneymaker, who actually won the 2003 WSOP Main Event after winning his seat to the tournament via an online satellite.

You won’t know unless you log on to 888poker and take your shot at securing a prize package – either the $12,600 Main Event or the $2,700 Crazy Eights. A WSOP bracelet and a potential huge cash prize is on the line!