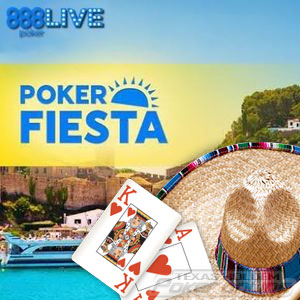 888Poker is offering players the chance to win a package to next month´s 888Live Costa Brava event with a six-step promotion that has buy-ins as low as $0.01.

The 888Live series is a world-wide series of live poker events that takes in such fantastic destinations as Brazil, Spain, Canada and London. Each leg of the tour has a full schedule of tournaments, a stack of cash game action and some superb activities laid on by Team888.

The series got off to a cracking start last month, when Aspers Casino in London hosted the first 888Live event. 590 players including Kara Scott, Dominic Nitsche and Sofia Lovgren competed in the £50,000 guaranteed Main Event – Scott scoring a third place finish for £10,250!

From Wednesday 18th May until Sunday 22nd May, 888Live is heading off to the magnificent Costa Brava Gran Casino in Lloret de Mar – around 75Km north east of Barcelona – for another five days of fun and games, and you can join the team in Spain by winning a package to the Main Event from as little as $0.01.

How to Win a Package to 888Live Costa Brava

Naturally 888Poker wants to see as many players as possible at its 888Live events and, in order to achieve this, the site is once again running a six-steps promotion with a starting level of $0.01 that culminates in a $160 buy-in 888Live Costa Brava qualifier.

The winner(s) of the Costa Brava qualifier will win a package to the 888Live event that includes four night´s accommodation at the five-star Guitart Monterrey Hotel, the €165.00 buy-in to the €50,000 guaranteed Main Event, $450 towards travel expenses and an 888Live kit.

Players can buy-in to any of the six steps or directly into the 888Live Costa Brava qualifier. If you already live close to in Lloret de Mar and don´t want the hotel accommodation, you can also buy in directly to the 888Live Main Event through the 888Poker client.

A Big Ask, but It Has Been Done Before

Qualifying for a major live tournament by going through six satellite stages is a big ask – but there is a precedent. 888Poker hosted a similar steps promotion for last year´s World Series of Poker Main Event and Tommy Yates – a bar owner on the Greek island of Rhodes – invested $0.01 of his bankroll to give it a go.

Fast-forward several weeks, and Tommy was on a flight to Las Vegas with his wife having progressed through the five qualifying stages and then winning an all-expenses paid package in the final step. The story gets even better, as Tommy was one of a dozen 888Poker qualifiers to the WSOP Main Event who cashed in the tournament – taking $19,500 bar to his bar in Rhodes.

Typically thirty or more players qualify for 888Live events through the site´s promotions. Not all enjoy the same ROI as Tommy Yates, but the packages are there to be won and you have to be in it to win it. Steps tournaments to 888Live Costa Brava are now running around the clock at 888Poker.

888Poker´s latest ambassador – Kara Scott – is already confirmed as the host for the event. Kara will be making sure that every 888 player has a good time in Costa Brava and is also intending to get involved in the Main Event action herself. Kara told 888Magazine:

I’ll absolutely be playing the tournament. I’m lucky that I’ll be in Spain to host the event, but there should also be enough time for me to sit down at the tables and try my luck. Have you seen the trophy? I want it!  After doing so well in London I’m gunning to make 2/2 final tables as an 888 Ambassador. Hey, a girl can dream.