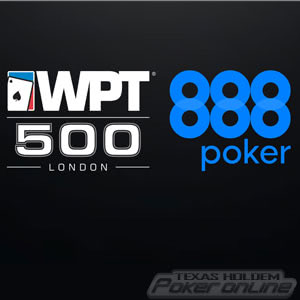 888Poker has teamed up with the World Poker Tour to bring a special edition of the WPT500 to the UK. Players will have the choice of playing Day 1 online or at three venues across the country, before playing out the climax of the event at Aspers Casino in London.

If you have already started making plans for this year´s Easter holidays, you may want to think about reconsidering them – especially if you enjoy playing in valuable live poker tournaments. This is because 888 and the World Poker Tour have teamed up to bring a special edition of the WPT500 to the UK, and the conclusion of the event will be played in London over the Easter weekend.

Of course, you could have already planned to spend Easter in London; in which case cashing in the $1 million guaranteed WPT500 event would be a good way of paying for your holiday. Better still, you can book your seat in Day 2 of the event by qualifying in advance through an online Day 1, or via numerous live Day 1s that are scheduled for venues in London, Milton Keynes and Newcastle.

A Little Bit of WPT500 History

The WPT500 is so-called because of its original buy-in ($500 + $65). It was first played at the Aria Casino in Las Vegas in July 2014, where it successfully went head-to-head against the World Series of Poker due to a $1 million guarantee. The WPT500 made its UK debut at the Dusk till Dawn Poker Club in Nottingham in November 2014 – where the event smashed its £1 million guarantee by £660,000.

The following July, the event returned to the Aria Casino and became the largest event in World Poker Tour history, attracting 5,113 entries. In subsequent years, the event has been expanded into a summer series at the Aria and has become renowned for its fun atmosphere and great structure. 888Poker is hoping to recreate the fun atmosphere when the event makes its London debut in March and April.

If you are an existing player at 888Poker, an online Day 1 is scheduled for Sunday 11th March at 7:01pm (GMT). The direct buy-in is $565.00, and a satellite structure starting with buy-ins of just $0.01 is provided for players with limited bankrolls. Qualifiers are now running at 888Poker, which – at the moment – are fairly lightly populated due to the target event still being a month away.

If you prefer live action to online action, live Day 1s are being hosted at the Aspers Casinos in London, Milton Keynes and Newcastle from Friday 23rd March to Sunday 25th March, and at Aspers Casino in London from Thursday 29th March to Saturday 31st March (Live Day 1 buy-ins are £420.00). Day 2 is scheduled for Easter Sunday (April 1st), with the Final Table reaching its conclusion on Easter Monday.

The early date for the online Day 1 leaves the door open for more online Day 1s to be added if 888Poker gets a good response to its satellite schedule. With the top 12% of entries and re-entries from the combined Day 1s cashing in the event, it is conceivable players failing to get through the online stage will find some money added to their accounts after the event has finished.

Therefore, regardless of your plans for Easter, keep an eye out for more tournaments and satellites being added to 888Poker´s tournament lobby. The event is unlikely to reach the grand heights of the Aria Casino in 2015, but it could well be an event worth qualifying for and – if you make it to London over the Easter weekend – good luck at the final table.