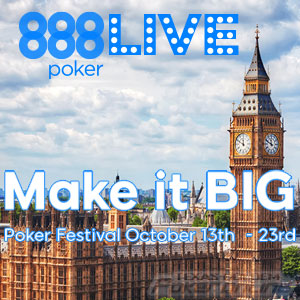 888Poker is launching a series of live “Festival” events, kicking off with the London Live Festival at Aspers Casino between October 13th and October 23rd.

888Poker´s new live “Festival” events are more than just an extension of the site´s existing live “local” tournaments. The site is promising each Festival will have a comprehensive schedule with a better variety of tournaments, longer structures and a wider range of buy-ins than the site´s usual live poker events.

Judging by the schedule compiled for the inaugural London Live Festival, 888Poker is keeping its promise. The eleven-day series consists of twenty-two events (if you include the five Main Event satellites) that includes a mix of turbo, 6-Max, mega-stack and Omaha tournaments, with buy-ins ranging from £50 to £2,000.

The London Live Festival gets underway on Thursday 13th October with £220 buy-in Opening Event guaranteed for £100,000. The event has three opening flights (Thursday, Friday and Saturday), and even though players will receive starting stacks of 25,000 chips and levels will each be thirty minutes in length, the Opening Event is scheduled to conclude on Sunday.

The schedule for the midweek action is dominated by the Main Event satellites (buy-in £50) and the High Rollers event (buy-in £2,000), in which 888Poker ambassadors Chris Moorman, Dominik Nitsche, and Sofia Lövgren are expected to make an appearance. The three ambassadors will also be playing in the Main Event, when there will be an $888 bounty on their heads.

The £880 buy-in Main Event gets underway on Thursday with the first of two Day 1s. For their buy-ins, players receive a starting stack of 30,000 chips to negotiate the sixty-minute levels into Saturday´s Day 2 and Sunday´s Final Table. For players who fail to make it into Day 2, 888Poker will be hosting a £25,000 guaranteed two-day tournament with a buy-in of £220.

Likely to be Plenty of Value in the London Live Festival

888Poker is no stranger to Aspers Casino. The site hosts regular live poker tournaments at the east London venue and, despite a comprehensive online qualifying schedule, the events do not always reach their guarantees. For example, in July this year, the £500 buy-in 888 Summer Special at Aspers Casino only attracted 53 entries – resulting in a massive overlay in the £100,000 guaranteed event.

Despite the depth of online and live satellites for the London Live Festival Main Event, there will need to be a terrific response to 888Poker´s marketing for the Opening Event and the Main Event to break even. The two tournaments need 500 entries and 250 entries respectively to avoid an overlay, and – depending on the number of players involved in Day 2 of the Main Event – even the two-day £25,000 tournament may struggle to reach its guarantee.

What is assured is that players will be guaranteed a warm welcome and a good time at Aspers Casino. Built close to the London Olympic Stadium, the venue is used to catering for significant live poker events. In the past it has hosted the BoylePoker International Poker Open, three APAT World Championships of Amateur Poker events and several Party Poker WPT National tournaments.

If you fancy testing your poker skills against some of the most successful players in the world, the best way to book your seat at the London Live Festival is through the online qualifiers currently running at 888Poker. Satellites and sub-satellites for the £200,000 guaranteed London Live Festival Main Event start at just pennies – giving you the opportunity to get a fantastic return to your investment, whatever the size of your bankroll.

Make it BIG at the 888Poker London Live Festival