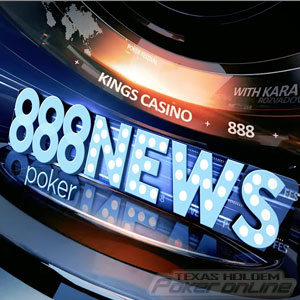 888Poker has added a news channel to its roster of social media channels in order to enhance its online profile, but sadly it fails to deliver anything new.

If you play at 888Poker, you may already feel overwhelmed by the amount of 888-related news coming in your direction. As well as the frequent emails and the pop-ups whenever you open the poker client, news about 888Poker is available via the eMagazine section of the website and the My888 community.

Just in case you missed the slightest piece of 888Poker news, the site is active on Facebook, Twitter and Instagram. Naturally, you have to subscribe to these social media channels if you want to take part in exclusive freerolls, but they pretty much cover any news you can already read on the website.

The site also recently signed the excellent Parker “TonkaaaaP” Talbot to live-stream action from the 888Poker tables on Twitch. Again, 888Poker has incentivised players to follow its Twitch streams with more exclusive freerolls and, if you felt “enough is enough”, the news is there is more news on the way.

Now the site has launched a “news channel” on YouTube to recap what the site has achieved over the previous month. Hosted by the sparkling Kara Scott, the news channel repeats what most players – and anybody who follows poker news stories – already know:

For more information about each of these news stories (except the result of the Kassouf vs Matuson “Grudge Match” – Matuson won), you can watch the video below. If you have no interest in finding out how 888Poker´s ambassadors fared in the Super XL Series, fast-forward to 4:30 – where there is a brief, but entertaining interview with Parker “TonkaaaaP” Talbot.

Sadly, 888Poker News fails to deliver anything we don´t already know. Although the video is well put together and well presented, it avoids the most contentious issues affecting players at 888Poker (bots, collusion and multiple accounting) and makes no mention of the sites short-notice withdrawal from the Australian market – probably one of the biggest 888Poker-related news stories of the month.

Furthermore, when you compare the value of Super XL Series ($5 million) to PokerStars TCOOP ($15 million) or Party Poker´s PowerFest ($11 million), promoting 888Poker´s tournament series as a success is frankly embarrassing. The Super Whale is nothing special compared with the Sunday Million or Party Poker´s Title Fight (both of which have lower buy-ins), and while 888Poker is giving 93% of its players a ticket to a freeroll tournament in its Treasure Quest promotion, Party Poker is giving away hundreds of tickets to its $6 million guaranteed MILLIONS event next month.

Nonetheless, there are Good Reasons to Play at 888Poker

Despite our low opinion of 888Poker News, the site itself is worth checking out if you have not played there before. Superior graphics and a friendly environment provide an excellent online poker experience, while the mission-based Players Club encourages players to enhance their bankrolls in ways other than contributing to the rake in order to earn Player Points.