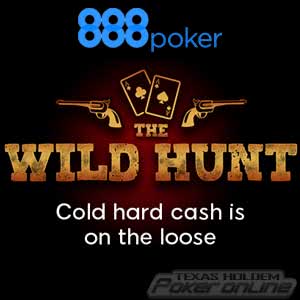 A new wacky, Wild Surprise promotion is underway at 888 Poker that allows players to enter daily freerolls that could pay out as much as $20,000 twice a day.

To be eligible, players need only to complete any one of three simple missions in order to earn a freeroll ticket. The missions are divided among poker cash games, tournaments, and casino play. The three separate challenges couldn’t be much easier and consist of the following:

The “wild” part of the promo comes into play after all players are seated and the tournament is set to begin. Each Wild Surprise freeroll has a $2,000 base prize pool, but more prize money is added – and in some cases – lots more money!

Also adding to the wildness of the Wild Surprise promotion is the way the money is paid out to winners. The top 1,000 finishers of every tournament will win money based on a formula devised by 888 Poker. The payouts will escalate according to how much money was added to the prize pool prior to cards being dealt.

The payouts of each are listed below:

What is the Frequency?

So you’re likely asking yourself, how many times will $18,000 be added to the base prize in order for players to be shooting for the most available prize money of $20,000? That’s a great question, to which 888 Poker has a ready answer.

Below are the number of times each freeroll will go off. Of course, the Wild Surprise is that you never know which day or time the prize pools will be highest, lowest, or somewhere in the middle.

So the answer to the previous question is that the top Wild Surprise Tournament offering $20,000 in prize money and $500 to the best nine finishers will occur seven times out of the 100 freerolls. By the way, the 100 freerolls combined will pay out a whopping $620,500.

Players should keep in mind that it’s required to opt in to the Wild Surprise promotion. After opting in, just choose among the three missions to complete in order to be awarded a freeroll ticket.

Each player can obtain up to two tickets every day in order to play in both Wild Surprise Tournaments hosted daily. Everybody loves surprises, right?