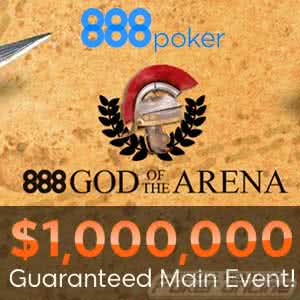 The popularity of Progressive Knockout tournaments has prompted 888 Poker to feature a poker series entitled “God of the Arena” in which all 12 events will be played under a PKO format including the Main Event that will pay out a guaranteed $1,000,000 in prize money.

God of the Arena will run from October 11 thru the 14th, with three tournaments scheduled each of the four days. The short series is a celebration of sorts, as 888 Poker is adding Progressive Knockout tourneys to its daily MTT schedule.

For those unfamiliar with Progressive Knockout tournaments, the action is similar to traditional knockout or “bounty” tournaments in which each player has a bounty on their head and the player responsible for eliminating an opponent collects that player’s bounty. The difference in PKO tournaments is that half of the bounty is collected by the player who did the knocking out, while the other half is added to that player’s own bounty.

It makes for a situation where players who run deep in the tournament tend to have big time bounties attached to their heads from sending many of their opponents to the rail. While it remains important to aim for a piece of the traditional prize money, success at PKO events requires the added strategy of shooting for some knockouts as well.

Here is the God of the Arena tournament schedule:

As you can see, there are a wide range of buy-ins, from $5.50 on up to $215. The headlining Main Event with the massive $1 million GTD prize pool is only $55 and allows players to rebuy a maximum of five times.

Tickets to the qualifier can be obtained by completing the daily challenge of knocking out 2 players in any MTT and Sit & Go with an entry fee of $1 or more. That excludes BLAST and heads-up tournaments.

There has already been considerable buzz on online poker forums regarding 888 Poker adding Progressive Knockout tournaments to their daily MTT schedule. It’s been a long time coming and the upcoming PKO series next month seems a fine way to launch the popular tournament.

Who will be crowned God of the Arena at 888 Poker next month?