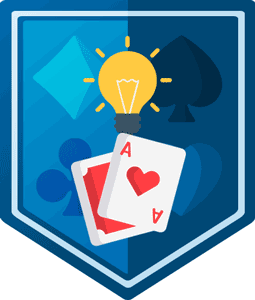 Whether you’re just starting out in poker or looking for a way to improve upon your game, these poker tips will help identify some of the most common problems new and losing players have.

These 5 best poker tips will be very helpful to start you on your way to becoming a winning player for once. We can’t all be pros, but at least we can win a little money while we play. Scooping a nice pot is one of the most rewarding parts of my life and that feeling of joy and excitement with each big pot never goes away.

I’ll be honest, it took me quite a while to start learning how to be a winning player, but with some help from a friend and a little learning on my own, I soon developed a knack for poker and quickly became a winning player soon after.

If I had known back then what I know now, my road to success would have been a lot shorter and more fulfilling.

But, my losses are your gain. I’m here to share with you some of the tips I’ve picked up along the way so that you don’t have to spend hours wasting your hard earned money trying to figure out how to become a winning poker player.

Poker Tip #1: Play within your limits

As a new player, you may be tempted to jump right into the big game and test your luck. Most of the time this approach will fail miserably and leave you with a sour taste for the game. You may not even want to play after you have such a miserable time.

While playing for higher stakes is glamorous and exciting, it’s not very profitable for a new player.

Many new players make this mistake over and over. They take what little money they have and go straight to the highest limit they can afford and blow their wad on a few hands, leaving the table with a bruised ego and an empty wallet.

You must understand that you aren’t the best player and that you have much to learn. There’s no shame in playing the penny game with players who you can beat. Many of the top pros have done the same and worked their way up over time and now have a very successful career.

Playing for small stakes can be boring; I’ll be the first to admit that. And I’ll also admit that I too was once victim of lack of patience.

Growing tired of the little money of I was winning, I took my roll to a higher limit and was quickly smacked I the face with reality. Instead of spending a couple more sessions at the low limits and building up a nice bankroll, my shot at glory would end up being one of the biggest setbacks of my career. In just an hour or so, I had given away all that I worked so hard for, all by making a bone headed decision that could have easily be avoided.

If you want to be a winner, you have to be patient and understand that the money won’t come rolling in right away. It will take time and some learning to move up in limits and actually become a decent winner. There may be exceptions to the rule, but they are never the standard. So don’t think your the next Phil Ivey and think your too good for small stakes. Stay where you’re at until you fully understand the game and are ready to start the climb to the top.

A sit n go is a type of poker game that acts like a mini-tournament. It starts when the pre-required number of players join and ends once all players are busted but 1. It takes much less time to play one of these, but gives you plenty of practice for a small fee.

Sit n Go strategies are different from most other forms of poker, but so is a tournament and cash games. No matter what you play these days, you will need to adapt to the style in order to win.

Having said that, a sit n go is by far the easiest to learn and allows you to play a ton of poker. You only pay a single fee for each game, yet you get to play hundreds of hands. This is an excellent way to learn the game and get better in a short time, especially if you have a small bankroll.

To quote the Jackson 5, poker can be easy as ABC. (Not an exact quote, but good enough for a cheesy segway).

Another typical mistake new players, and experienced ones make, is to try and play too fancy. When you’re starting out, you can get away with playing nothing but premium hands and betting for value when you have a good hand.

Since you are playing smaller limits like I told you to do a few tips earlier, you only need to be playing a simple style of poker. The players at lower limits are so bad that you don’t need to do anything fancy or try to out play them by attempting the last bluff you saw on the WPT.

Stick to a tight game, and have some patience and you will be amazed at how well you can do.

Ok, this one may sound a bit strange, but trust me when I say, never take advice from anyone. Most of the time a player dishing out advice is a losing one and only looking to hear themselves talk. Winning players don’t want other people to know what they do to win, why should they want you?

This may be a bit far stretched, as there are some good players willing to give solid tips and advice, but you still never want to take it, just because.

My point is, take every piece of advice and judge it for yourself. If someone tells you that playing a hand a certain way is right, why should you believe them? This includes the article you are reading right now. While my advice is always good, you should still not just believe what I say, because it’s on a super duper, amazing website.

I’ve seen some pretty fuckin cool websites with the worse information ever from portraying themselves as experts in their field. Sometimes I fall into the trap and take it at face value. Don’t you do the same!

There’s really good advice out there from some top players, but you still need to understand that what works for someone playing high stakes, will not work at the limits you play at. Once you get familiar with the game and understand basic concepts, you can start to better process the information you come across.

Pretty soon, your brain will immediately be able to filter out the garbage and understand what good advice is.