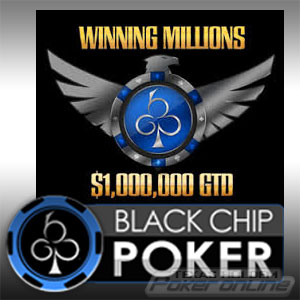 Black Chip Poker´s “Winning Millions” event is just around the corner and, in order to allow more players to get a little extra value in the $1 million guaranteed tournament, the site is changing two of its major weekend tournaments to award thirty-two extra seats each week into the target event.

From this weekend, instead of offering seats into live event qualifiers such as the Punta Cana Classic and Latin Poker Series, the weekly “Beast” and “Sit n Crush” tournaments will be offering a minimum of thirty-two seats into the Winning Millions tournament on Sunday 14th December – each worth a colossal $540.00!

Black Chip Poker´s Winning Millions is the first online poker tournament since Black Friday in 2011 to offer a seven-figure guaranteed prize pool, and consequently it has attracted significant interest from players from all over the world. Already more than 150 players have qualified for the tournament through Black Chip Poker´s extensive satellite schedule, and with seven weeks to go before the cards are in the air, the event could see a total entry in excess of a thousand players.

The tournament itself starts at 15:00 ET (20:00 GMT) and has late registration for five hours, during which time players have the opportunity to re-enter and receive a fresh starting stack of 10,000 chips if they have the misfortune to be knocked out during the early stages. A gentle blind structure means that players taking advantage of the full late registration period will be playing with ten big blinds (level 20 blinds are 500/1,000 – ante 100) and a lot of late registrations are anticipated.

Qualifying Through the Beast and Sit n Crush Tournaments

Tickets to the “Beast” and “Sit n Crush” tournaments are awarded to players who finish at the top of the weekly “Beast” rake race or “Sit n Crush” leaderboard in addition to the valuable cash prizes. However, each tournament can be bought into directly with cash or by using Black Chip Poker Benefit Points – ensuring that there is a sizeable field in each event.

The “Beast” tournament is often the more popular of the two – having a lower buy-in of $27.50 – and from this Sunday (@ 6.00pm ET) the tournament will be guaranteeing a minimum of twenty-five seats into the Winning Millions event. Players who miss the opportunity of competing in the “Beast” tournament – or those who prefer smaller fields – can opt to play in the “Sit n Crush” tournament (Sundays @ 8.30pm ET) which has a direct buy-in of $55.00 and which guarantees a minimum of seven seats into the target event.

Sounds Good? What are you Waiting For?

The extra seats for the Winning Millions through the “Beast” and “Sit n Crush” tournament are available from this coming Sunday (November 2) and if you are not already playing on Black Chip Poker there has never been a better time to sign up for an account and get involved in the superb promotions that Black Chip Poker has to offer.

If you are not convinced by the opportunity of winning a lion´s share in the $1 million guaranteed Winning Millions tournament, head on over to our Black Chip Poker review to see what else the site offers to new players – and then register for an account using the Black Chip Poker bonus code of “CHIPPED” to qualify for immediate entry into the site´s Elite Benefits loyalty program and for up to four exclusive $250-added freeroll tournaments.